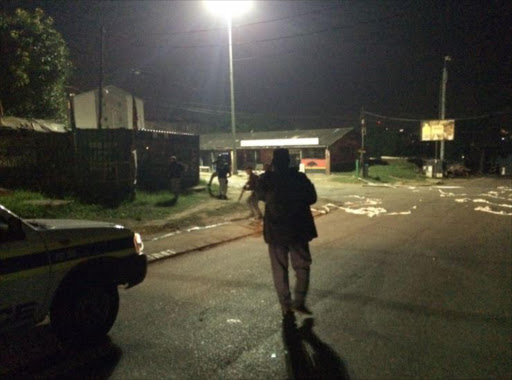 Police officers scramble to retake the Amazambane Butchery from a gang of looters
Image: Jeff Wicks‏ via Twitter

Scores of shops belonging to foreign nationals in KwaMashu‚ Durban‚ were looted and torched in a fresh wave of xenophobic violence on Monday night.

A rumour that foreign nationals had orchestrated a wave of child kidnappings in the township prompted a violent community backlash as police battled mobs of looters.

At the epicentre of the violent uprising was the notorious KwaMashu Men's Hostel in A Section‚ a hotbed of criminal activity.

Automatic rifle fire cracked through the night air as platoons of policemen scrambled to halt the looting.

"It is like a war zone here‚" one police officer said while levelling the sights of his rifle into the night.

The Amazambane Butchery had been overwhelmed by a mob early in the night‚ and was one of the first corner shops to be reclaimed by police.

Scenes at the Amazambane Butchery in A Section #KwaMashu before police arrived @TimesLIVEpic.twitter.com/PiUCdlP9aZ

The gang‚ who loosed off shots at officers as they fled‚ had managed to cut a safe out of the wall and pry open an ATM.

Stolen toilet paper had been flung over the power lines in the intersection in front of the butchery and dangled in the breeze as the junction became a staging point for tactical police to enter the section.

Nearby‚ the Goodwill Supermarket had been cleared out and set ablaze.

Police officers face off with a gang of looters at the entrance to A Section #kwamashu@TimesLIVEpic.twitter.com/TQYFDQuuVy

As policemen and security personnel moved to assess the damage‚ looters hidden in the tightly packed shacks taunted them from the darkness.

One Somali shop owner‚ who would not be named‚ was desperately moving stock from his shop in B Section while under police guard.

"As soon as the police go‚ they [a mob of onlookers] will come for this place‚" he said. Police spokesperson Brigadier Jay Naicker said that the violence had been sparked by a rumour.

"Apparently people are disturbed by fake news of children being kidnapped in the area. Despite our intervention via the media to inform the community that no such kidnappings took place‚ messages continue to be spread on social media platforms‚" he said.

"It started last week. Someone is orchestrating this campaign. Despite the numerous fake kidnappings and attempts‚ we also had a report of an ambulance being hijacked and the patient being harvested for body parts‚" Naicker added.

In 2015 KwaMashu was beset by xenophobic violence‚ which had swept across the country.

Weeks of unrest displaced thousands of foreign nationals‚ who were forced to flee from their homes.

The attacks had followed a speech by Zulu King Goodwill Zwelithini in which the monarch had spoken in veiled terms about the presence of immigrants.