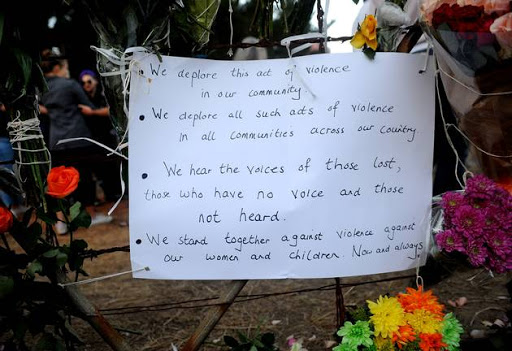 A note that reprimands violence and crime is seen during the silent vigil held to pay respect to the murdered Franziska Blochliger on March 08, 2016 in Cape Town, South Africa. The 16-year-old jogger was murdered in the Tokai Forest on March 07, 2016. File photo
Image: Gallo Images / Die Burger / Lerato Maduna

It’s a melancholy commentary on Cape Town that scientists turn to the city to examine deadly violence.

Studies published in the last few days reveal that young men from poor areas bear the brunt of brutality in a city where murder is the second highest contributor to unnatural deaths‚ and which lays claim to the world’s ninth-highest murder rate.

One of the studies‚ by three University of Cape Town pathologists‚ looked at 828 cases in which murder victims died as a result of blunt force trauma. The other‚ by a University of the Western Cape physiotherapist‚ examined spinal cord injuries caused by bullets.

In the first‚ published in the South African Journal of Science‚ the UCT team looked at autopsy reports from Salt River Mortuary between 2010 and 2014.

The mean age of victims of blunt force homicide victims was 31‚ and just over 90% of them were men. “Clearly‚ South African men of working age behave in a manner that puts them at greater risk of violent injury than ... women‚” said the researchers.

They blamed this on “complex socio-biological interactions including perceived masculinity and increased risk-taking behaviour”‚ adding that gang violence was an additional factor in Cape Town.

The highest number of victims were killed on Sundays. “It is thought that this trend could be attributed to people spending more time taking part in social drinking over the weekend‚” said the study.

Street justice also emerged as a factor‚ with some victims sustaining as many as 70 blows. “Cases showing multiple combination injuries are thought to be associated with multiple aggressors — often seen in cases of community assault particularly in the in the form of ‘mob’ or ‘vigilante’ justice‚ which is common in the Western Cape.”

The second study‚ which covered a year‚ looked at 45 survivors of spinal cord injuries caused by gunshots. All but two of the patients treated at Groote Schuur and Tygerberg hospitals were men with an average age of 26.and more than two-thirds ended up as paraplegics.

Researcher Conran Joseph said in the South African Medical Journal: “It seems necessary to identify factors that place younger men at risk of engaging in interpersonal violence and also investigate whether perpetrators are valid firearm-licence holders‚ since 16 persons are shot and killed each day ... in South Africa.”