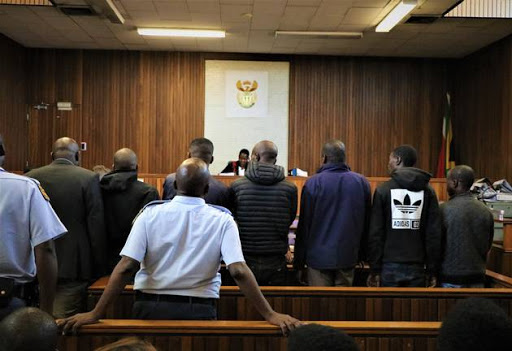 The eight men accused of involvement in the OR Tambo heist. File photo
Image: Kyle Cowan

A man out on bail for his alleged involvement in the OR Tambo heist two months ago has been re-arrested following a truck hijacking in Johannesburg.

Gauteng provincial police spokesperson Lieutenant Colonel Lungelo Dlamini said the man‚ along with four other accomplices were intercepted by police and the Johannesburg Metro Police.

"Police arrested five suspects after a truck driver who was on his way to Cape Town was hijacked near Grasmere Toll Gate (N1). It is alleged that the driver was stopped by a Metro Police vehicle and‚ immediately three other vehicles stopped‚" Dlamini said.

Dlamini said the driver of the truck was forced into another vehicle before the suspects made off with the truck.

An off-duty Johannesburg Metro Police officer who saw the incident called for back up‚ with the JMPD and police shortly thereafter intercepting the truck and a white polo used by the suspects.

Dlamini said police arrested five people and one of them was out on bail following the OR Tambo heist in March this year.

The five suspects will appear in the Protea Magistrate's Court on Thursday on charges of truck hijacking.