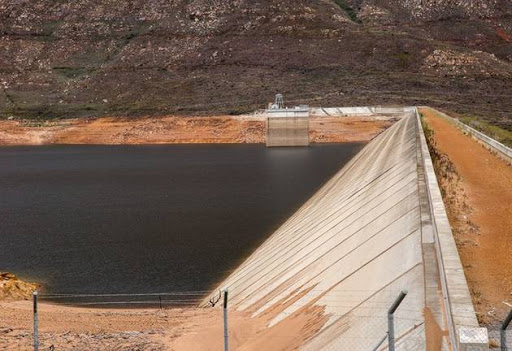 The Berg River during the severe drought in the Western Cape.
Image: Ashraf Hendricks/GroundUp

Farmers' organisation Agri SA has approached the Public Protector and the Auditor-General to investigate what happened to millions of rand in state drought relief funds allocated for distressed farmers.

Last year the country was hit by the worst drought in decades‚ with six of the nine provinces declared disaster areas‚ but Agri SA says information shows that money earmarked for relief was wasted through the appointment of service providers who knew very little or nothing about agriculture. Some of these service providers were listed as cleaning and construction companies‚ according to Agri SA.

Speaking to journalists in Pretoria on Thursday‚ the organisation said this resulted in wrong feed delivered to farmers‚ some of which was found dumped in the Free State. Several boreholes were also drilled in the same area. Feed prices were inflated to benefit the service providers and departmental officials took some of the feed for themselves‚ the organisation charged.

Agri SA said despite R265-million spent by the Department of Rural Development and Land Reform on relief programmes‚ farmers have told devastating stories of how all they received was only enough feed to feed their livestock for a day. Omri van Zyl‚ Agri SA CEO‚ said it was unclear what this was spent on.

“As far as we know almost no commercial farmers were assisted through this intervention. This is why we have asked for the investigation‚” he said.

Van Zyl explained that the department of agriculture‚ forestry and fisheries allocated R212-million‚ of which only R146.2-million was spent despite the country being in the grips of the worst drought in decades.

Van Zyl said they were surprised when they discovered that R290.7-million of these funds were spent on a desalination plant in Richards Bay in KwaZulu-Natal.

“We were surprised in a time of drought you want a desalination plant‚" he said.

According to the organisation‚ which represents 29‚000 members across all nine provinces‚ 90% of the R212-million in relief funds was distributed to subsistence farmers‚ less than 10% to emerging farmers and nothing to commercial farmers.

The organisation said government spent R212-million on 74‚586 farmers‚ an average of R1‚961 per farmer. Van Zyl said Agri SA assisted 15‚000 farmers through their R16-million raised from donors as part of their drought relief campaign.

"With R212-million‚ we could have assisted 150‚000 farmers‚ double the amount assisted by government‚" he said.

Director of communications in the Department of Rural Development and Land Reform‚ Steve Galane‚ said they were concerned by what had been raised by Agri SA.

“We are concerned with what has been presented‚ that the money allocated to farmers did not reach them. We will cooperate (with any investigation). We are also looking into the issue‚” he said.