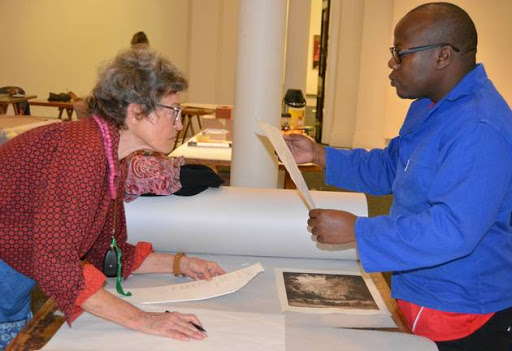 Employers at the Tatum Art Gallery pour over some of the artwork damaged during an act of sabotage last week.
Image: SUPPLIED

There may be a silver lining to the flood damage at Pietermaritzburg’s Tatham Art Gallery.

The basement of the building was flooded due to a two-and-a-half day power outage‚ which resulted in the underground river pump failing to activate.

The Msunduzi Municipality confirmed that their staff switched off the power in an act of sabotage during the municipal workers’ protest on Wednesday 24 May.

The room was flooded with half a metre of water‚ with the damage discovered last Friday morning.

Many of the rooms at basement level had been used to store works of art.

The Tatham‚ founded in 1903‚ is one of seven major art museums in South Africa.

Director of the gallery‚ Brendan Bell‚ confirmed that 427 artworks had been affected by water damage. However‚ the good news is that‚ he believes‚ none will be permanently lost “due to prompt action by all concerned”.

“We are confident that most works can be restored to good condition. Works on paper have been our first priority. Ironically‚ with careful treatment in water baths and gentle flattening‚ many of the artworks will probably be in better condition than before the flood‚" said Bell.

Gallery staff‚ other municipal officials‚ contractors and volunteers spent the days after discovery of the flooding moving the artworks from the basement to the main exhibition centre on the ground floor. This area has been turned into a conservation workshop.

Bell is still concerned about a number of damaged oil paintings‚ most of them by Victorian artists.

“We will have a better idea of the extent of damage when our painting conservator arrives next Monday‚” he said. “He has advised us to keep the paintings laid flat on their backs to prevent further paint loss and to allow the gesso frames to dry out.”

The conservator will also be able to give an estimate of the costs of restoration.

Bell hopes that much of the gallery’s public areas will be open from Tuesday next week.

CCTV footage is being used to identify the municipal workers responsible.