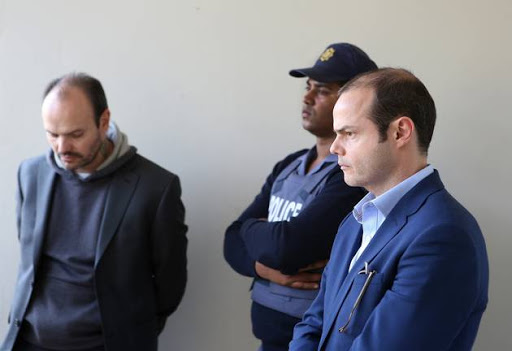 Lucas Dougherty right with his handcuffed brother, Diego Novella, during an inspection of the crime scene at the Camps Bay Retreat Hotel on Tuesday.
Image: Ruvan Boshoff

It’s been 673 days since Lucas Dougherty last saw his brother outside of a Cape Town court or prison.

During that time‚ Diego Dougherty Novella has undergone intense international media and public scrutiny for the alleged murder of his girlfriend‚ Gabriela Alban‚ in Camps Bay in 2015.

Newspapers in his home country of Guatemala have labelled him a “pariah‚” a “drug addict” and a “womanising playboy”. TimesLIVE investigated possible connections to the notorious gang MS-13.

Through it all‚ Dougherty has stood behind his older brother. He has attended almost every hearing and the whole of his trial‚ rearranging a busy work schedule to make the 12‚500km trip.

“I’m positive that Diego would do the same for me or any of my siblings. It is very intimidating to be standing in court with the family of the deceased on one side and the press on the other‚” the businessman said.

Those six siblings have always been close to Novella‚ the fourth youngest in a family of seven. Growing up as the children of a prominent and wealthy family in Guatemala‚ the Dougherty siblings dealt with the public eye early on.

“Mostly when we were kids the aspect of safety was a big issue. We lived in a country where being a prominent person can mean there is a target on your back‚” Dougherty said.

Dougherty and Novella developed a closer relationship when the two were sent to Catholic boarding school in the US. They had the usual “sibling fights” but “stuck up for each other in a foreign country”.

That Catholic schooling‚ underpinned by their mother’s firm faith‚ has stuck with Dougherty and his siblings.

“We aren’t as religious as our mother‚ but that doesn’t mean you don’t have faith in God or goodness‚” Dougherty said.

The brothers have remained in close contact‚ and Dougherty was there for Novella during his relapses with drug addiction‚ as well as the current accusations.

“Diego has lived a party lifestyle at times but throughout his struggles he has never been aggressive or violent. I was very surprised to discover what my brother was accused of doing. A lot of friends have approached my family saying they were in disbelief. He is a very kind person who loved Gabriela‚” Dougherty said.

Media reports frustrated Dougherty‚ a point that made him hesitant to speak to reporters. But a desire to show the “true Diego”‚ a man “very concerned” about Alban’s wellbeing‚ changed his mind.

“I see these reports that say terrible things like my brother shows no emotion. This doesn’t mean he doesn’t care. People don’t always show what is going on inside of them. This has been very tough on him because he genuinely cared for Gabriela‚” Dougherty said.

When Dougherty met Alban‚ he said he noticed she and his brother were very affectionate with each other. Novella contacted Dougherty on several occasions to say he was “worried” about Alban’s health and wanted “to take care of her”.

Now on trial for her murder‚ Novella has gone through his own struggles during his time in custody. His father died in 2016 and Novella was unable to attend the funeral.

“On top of all the hard things that we are going through‚ getting that news that my father passed away was devastating. Being in an environment like Pollsmoor while my father was buried just destroyed Diego‚” Dougherty said.

But throughout his incarceration Dougherty said his brother has done his best “to keep his spirits high”.

“The ability to survive in Pollsmoor and still be the Diego I know shows a person with amazing strength. That prison really exposes who you are; it brings out your essence‚” Dougherty said.

For now Dougherty will be by his brother’s side‚ supporting him as he has in the past‚ in court until work forces him to return to Guatemala.

“I love him no matter the verdict. He will always have my support because I know the great person he is. Whether the verdict is for him or against him‚ it won’t change my feelings because he is my brother.”