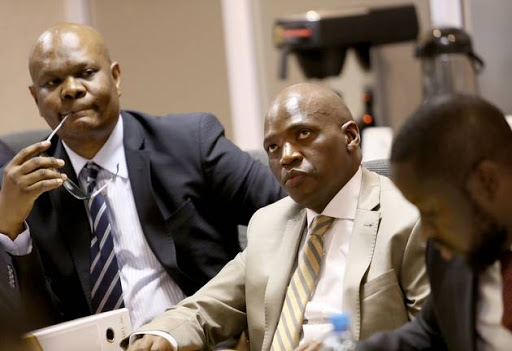 Former SABC COO Hlaudi Motsoeneng, with his lawyer Zola Majavu, appeared before a disciplinary hearing on comments he made at a media briefing in Sandton. File photo
Image: ALON SKUY/ THE TIMES

Embattled former South African Broadcasting Corporation COO Hlaudi Motsoeneng has lashed out at board member Krish Naidoo‚ accusing him of lying to Parliament and “slandering” him.

Motsoeneng has made the comments in an affidavit in response to the charges in his disciplinary hearing.

He is trying to halt the disciplinary hearing into alleged misconduct following an April 19 media briefing at which he criticised a parliamentary committee that held an inquiry into alleged irregularities at the SABC as well as the fitness of its board.

In particular Motsoeneng was critical of Naidoo‚ who is a member of the current interim SABC board and served on the former board of the public broadcaster. Motsoeneng launched a scathing attack on Naidoo for comments he made during his appearance before the ad hoc committee. He described Naidoo as a "sell out" who lied under oath.

At the media conference‚ Motsoeneng also defended his decision to implement a 90% local content policy at the public broadcaster.

In the affidavit filed on Tuesday Motsoeneng reiterated his criticism of Naidoo.

"The first striking statement Mr Naidoo make at such [an] interview is his personal attack directed at me. Mr Naidoo‚ with whom I worked with since 2013‚ playing to the politics of the day‚ refers to me as a high school dropout. This statement is untrue. Mr Naidoo is well aware that I possessed of a qualification from an accredited institution equivalent to a Bachelor's degree‚" Motsoeneng says in the affidavit.

"I have been subjected to unjustified slandering and malingering by the press‚ politicians and specifically Mr Naidoo. A typical example is the suggestion that I am unqualified for my current role. Mr Naidoo in his address before the ad hoc committee referred to me as a ‘high school drop-out’ and a ‘squatter at a national key point’‚" the affidavit reads.

Motsoeneng further stated that he had every right to call Naidoo a "liar" because Naidoo had "misled" parliament and the public.

At the time‚ Naidoo said: "Mr Hlaudi Motsoeneng was the ringmaster of the other group. I fail to understand how educated professionals find themselves beholden to a high school dropout. I mean... this is a man who was effectively squatting at a national key point‚" said Naidoo."

Motsoeneng added that the disciplinary hearing is not in line with the SABC's own procedures.

"Importantly my line manager Mr James Aguma granted me permission to address the press to set right certain misreporting relating to the ad hoc committee's hearings. He‚ it appears‚ did not take the decision to charge me‚ or refer such matter to the board‚" he said.

The disciplinary hearing is expected to resume on Friday.