Howling wind competes with the noise of hammering around the disaster relief camp in Hout Bay on Wednesday morning as people try to secure their corrugated metal and wood homes against the next round of the storm. 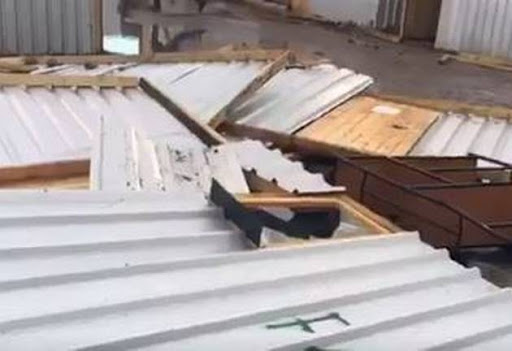 Nomvuyiso Ndevu’s home has been destroyed for a second time.
Image: Screengrab via Nashira Davids

For some people living at the camp it is too late: for the second time in less than three months they have lost their homes. First the fire in Imizamo Yethu; now the storm.

After darkness on Tuesday night the wind came over the mountains‚ uprooting and wrecking at least six houses at the camp while driving rain destroyed possessions.

Clutching a worn identity document‚ 27-year-old Nomvuyiso Ndevu‚ points to the flattened remains of her house which collapsed on her brother. He escaped unharmed.

“I came home from my work where I provide security‚ and found our house was down‚” she said.

Her brother Sibeko Ndevu‚ 30‚ said: “I was inside and I was lucky I wasn’t hurt. But we have lost everything again.”

Sithethelele Dluthu‚ 31‚ was sleeping at a friend’s place nearby when winds mangled and destroyed his home.

In the sports hall next to the camp‚ dozens of babies‚ toddlers and children have taken shelter with their mothers on mattresses and blankets strewn across the floor.

Zimi Makhalaza‚ whose nine-month-old baby is sucking on a bottle‚ says she sought refuge in the hall because she was scared for the safety of her daughter.

Three halls have been opened in the informal settlement of Imizamo Yethu to offer shelter to those at risk.

Wind damage and rain are expected to hit most residents of the settlement on the mountain slope and in the camp below.

City of Cape Town disaster management spokesman Charlotte Powell said almost 800 families were homeless on Wednesday thanks to the storm: 362 from the emergency area built for Imizamo Yethu; 74 from Disa Park and 264 from Madiba Square‚ both in Hout Bay; and 97 due to flooding in Macassar Village.

A heavy storm was wreaking havoc in the drought-stricken city of Cape Town on Wednesday morning. The storm, predicted to be one of the city’s worst in 30 years, has already damaged property and uprooted trees. Take a look at what the city looked like early on Wednesday. Subscribe to TimesLIVE here: https://www.youtube.com/user/TimesLive