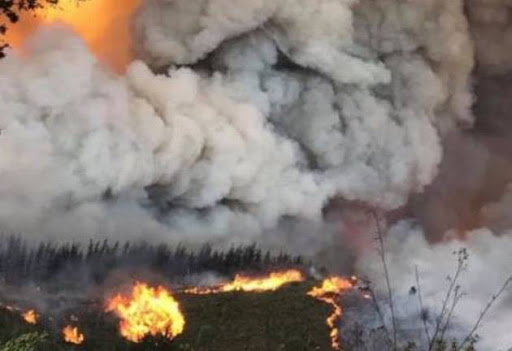 Up to 10,000 residents were forced to flee their homes in Knysna overnight as fires fuelled by storm winds ripped through the Western Cape coastal town.

Provincial local governance spokesman James-Brent Styan confirmed‚ in an update at 1am on Thursday‚ that 8,000 to 10,000 evacuations had taken place in the town of 77,000 residents.

A powerful storm that lashed Cape Town and the runaway fires in Knysna have claimed at least eight lives.

Emergency Medical Services (EMS) confirmed one more fatality in the Knysna area‚ reportedly due to a heart attack and unrelated to the storm.

As the fire raged through the night‚ emergency services evacuated the suburbs of Brenton‚ Belvedere‚ Welbedacht‚ Nania‚ Eastford‚ Green Pastures and Knysna Heights.

The fire was fuelled by strong winds early on Thursday‚ preventing the use of helicopters to douse the flames but some relief arrived as rain started falling.

Food‚ tea and coffee donations were being collected at drop-off points. The N2‚ which was closed overnight‚ was reopened early on Thursday.

“Reports of some residents refusing to leave their properties are coming in. We would request that if emergency services make a recommendation for evacuation that members of the public adhere to the request‚ for their own safety‚” he said. At this stage‚ he added‚ there was no call for a mass evacuation of the entire town.

BREAKING: 3 people (farm worker, his wife & son) have died from a fire in Rheenendal near Knysna. Fires burning out of control #sabcnews pic.twitter.com/Y39zliBVqw

At least three people — a farmworker‚ his wife and their son — had died in fires in Rheenendalhad outside Knysna.

“These are the worst fires I have seen in the 45 years I’ve lived in Knysna‚” said the town’s mayor‚ Eleanore Bouw-Spies.

Evacuees were being taken to various safety sites‚ including the Loerie Park area in town‚ transported aboard Go George Buses.

Firefighters responded to at least 26 fires along the Garden Route as most of Plettenberg Bay‚ Knysna‚ Sedgefield and Wilderness were shrouded in smoke.

The fires came in the wake of a huge storm which wreaked death and damage across the Western Cape.

Eden disaster management boss Gerhard Otto said all available staff had been deployed to deal with the fires‚ including staff that had been on rest breaks.

By mid-morning‚ about 13 houses had already been evacuated just outside Knysna towards Plettenberg Bay. The N2 between the two coastal holiday towns were closed due to low visibility.

Knysna municipal spokesperson Fran Kirsten said residents had also been evacuated from Belvedere‚ Brenton-on-Sea and Karatara outside Knysna‚ among other areas.

Plettenberg Bay and Knysna were also without power for most of Wednesday because of the fires.

Knysna fire chief Clinton Manual said there was little hope of stopping the fire and officials would continue evacuating all those in its path.

At least 11 fire engines were deployed to the area from neighbouring towns and the City of Cape Town. Working on Fire has deployed more than 120 firefighters to the area.

Meanwhile‚ those in need of help may have difficulty contacting the local fire station as several people tweeted that phone lines were down.

One woman took to Twitter to say an elderly woman was stranded on a hilltop after fleeing her burning home.

There was panic overnight‚ with some people struggling to locate their relatives. The Knysna Provincial Hospital was evacuated.

“The fire began on the one side but is now spreading to the other side of the town. Basically the whole town is burning‚” said journalist Ivo Vegter.

Earlier‚ Vegter said on Twitter: “Knysna is burning down. This is a disaster of epic proportions. I'm stuck in fleeing traffic. Not sure I'll have a home tomorrow.”

Martin Hatchuel said he had fled his home in Fisher Haven late yesterday afternoon to be with his family on Leisure Isle.

He said large sections of the town were on fire and many buildings had already been lost.

“It's a f-up‚” he said. “Apparently the main centre of town is burning.”

The fires came amid a day of dramatic weather across the province and which claimed at least eight lives to fire and damage caused by gale-force winds.

DA MP Dianne Kohler Barnard said on Facebook that her mother had fled a fire threatening Brenton-on-Sea. “She has taken her dog and some papers and driven off.”

Cape Town saw scenes of devastation as trees‚ street poles and roofs were felled by gale-force winds‚ while monster waves battered the coast.

The heartache of losing a home to natural disaster was repeated for hundreds of people in Hout Bay.

Hundreds of structures destroyed by the storm were built less than three months ago for families who lost everything when much of Imizamo Yethu was razed.

City of Cape Town teams worked to clear roads throughout the day‚ and at one point the city council asked residents to stop phoning its call centre‚ which was struggling to cope.

In Taiwan‚ Khayelitsha‚ community leader Noxolo Masilika said: “In this area alone 18 families were affected. Four shacks were blown away by wind and others were washed away by water.

Each household is comprised of a number of adults and small children. Some are trying to set up their homes in this weather while others moved in with relatives and neighbours.”

Masilika said she helped deliver a baby in a shack in the midst of the storm. The child’s mother had lost her home a few moments earlier and sought refuge with a neighbour.

“There was hardly enough room to move inside. We moved crates and other household items to accommodate her‚” said Masilika.

City of Cape Town disaster management spokesman Charlotte Powell said more than 800 families were homeless on Wednesday due to the storm: 362 from the emergency area built for Imizamo Yethu; 74 from Disa Park and 264 from Madiba Square‚ both in Hout Bay; and 97 due to flooding in Macassar Village.