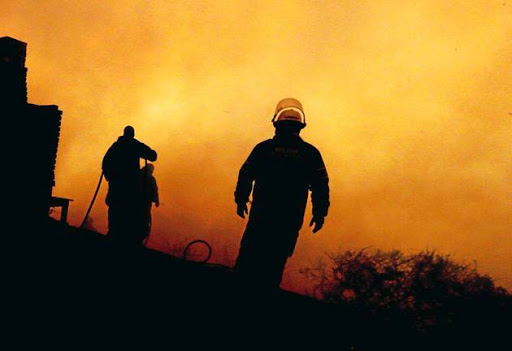 Fire-fighters battle to save a house in Buffalo Bay near Knysna yesterday as the fires along the Garden Route flared up again, fanned by gale-force winds.
Image: ESA ALEXANDER

Fire fighters pushed to contain the fires around Knysna on Sunday morning as weather conditions improved along the Garden Route on day five of the infernos that have wreaked havoc in the region.

James-Brent Styan‚ spokesman for Western Cape Local Government MEC Anton Bredell‚ said aircraft - both water-bombing choppers and fixed-wing spotter planes - were airborne shortly before 9am as the morning fog and smog lifted and cooler weather moved on over the Eden district.

“With wind speeds dropping‚ conditions are improving for aerial support‚” he said.

“The wide range of fire-fighting agencies were dispatched from the Incident Command centre in the Knysna Municipality‚ working closely with the Eden District Disaster Management centre.”

Styan said that divisions had held the line on Saturday night – holding the flames back – to protect the village of Rheenendal and Wit Lokasie settlement.

“Both areas were under threat during yesterday’s gale-force winds.

He added that the total fire line still stretched to more than 100km between Sedgefield and Plettenberg Bay‚ and the latest hotspots were identified for concerted attack on Sunday morning.

“Fortunately‚ the injuries to five fire-fighters reported yesterday have been confirmed as minor.

“Confirmed fatalities at this stage for the Eden district is six‚ including one firefighter.

“Fire commanders confirmed that no losses had been suffered in Buffel’s Bay‚ and some fires yesterday were deliberate ‘back-burns’ to protect the town from runaway flames‚” Styan said.

He said a fire in the vicinity of Sedgefield remained a concern on Sunday.