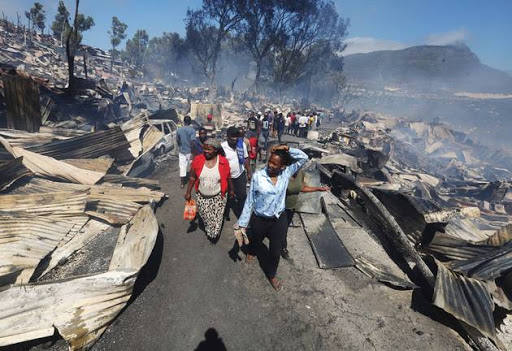 Six children cling to the sides of a shopping trolley with a yelling toddler inside as they hurtle down a steep road at the top of Hout Bay’s informal settlement‚ Imizamo Yethu.

They screech to a halt near the remains of burned shacks and new zinc structures‚ some of which got mangled by the storm last week.

They are playing a risky game‚ but this is their reality: they live in an unpredictable world.

Some of the children from this crowded settlement have lost their homes twice in less than three months.

In March‚ a fire razed more than 3‚000 homes. The survivors set up camp next to a school sports field and a polluted stream.

On Tuesday and Wednesday last week‚ winds and rain wreaked havoc‚ destroying a dozen of these homes‚ damaging many more and injuring some residents.

Sinovuyo Magqwira‚ 21‚ was one of the lucky ones. She shares a one-room shack with her sister‚ niece and cousin. “During the fire‚ all my things burnt. I could not even rescue my ID. But we didn’t have anything destroyed during the storm.”

Looking glamorous in blue overalls with lipstick and a smile on Friday morning‚ Magqwira walked 20 minutes to the top of Imizamo Yethu‚ past the ruins of her old home‚ with a female crew‚ to clear the fire wreckage. “We have a contract for two months doing this work. It is hard to find jobs‚” the Facebook fan said‚ while dragging a burnt bed frame away.

Shirley Mnyatheli has a more stable job with Working for Water‚ clearing alien vegetation. She lost everything in the fire and moved into the disaster relief camp.

Pointing to the flattened zinc shack she shares with her nine-year-old son‚ she said: “First the roof was gone and the rain came in‚ and then the house was down. The bed was broken and Nkosinathi was crying. We had to sleep in the hall and they gave us blankets.”

Clad in green overalls and boots on Friday morning‚ she braved the freezing weather as she waited to be picked up with her crew to go to work.

Ngcinikhaya Matomane‚ 48‚ was hard at work fixing his girlfriend’s home. A cousin was trying to sleep through the hammering after working night shift at a fish factory. “Everything got soaked and the floor was wet. The window was upside down and I’m fixing that. We also need a trench in front of the door… I had a job‚ working in the garden and painting but when I lost my home in the fire and I was away rebuilding‚ then I lost my job‚” he said.

His girlfriend‚ who shares her place with three adults‚ works in a fish factory.

A policeman confirms the camp is peaceful.

Two community leaders also made an appearance to talk to the contract workers clearing fire damage.

Community leader Mkhuluki Markiss said the City of Cape Town was committed to improving people’s living conditions‚ for example‚ by providing sandbags to prevent their roofs blowing away.

Youth leader Lulama Bini said hey had found officials in the mayor’s office kind and responsive. But people like Gugulethu Makhalaza are finding the waiting – for approval to rebuild their homes in Imizamo Yethu – interminable and the cold damp is hard to escape.

The rain fell on and off all weekend.

Meanwhile‚ the children in the camp push rickety trikes along the edge of the astro turf‚ where soccer fans play in the evenings.

Clothing and blankets are hanging out to dry on the low fence next to the green turf while a double-storey fence leaning bent and broken‚ on another side‚ is a reminder of the damage wreaked by the fury of the wind.