It took his own bizarre presser to finally bring Hlaudi down 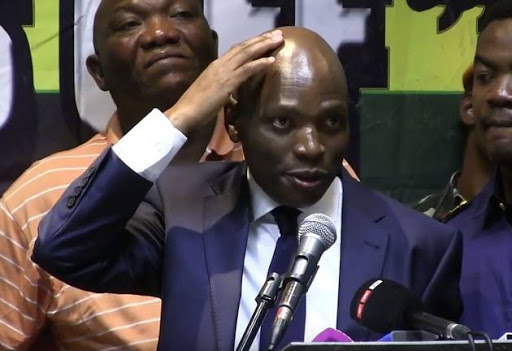 He dodged damning findings by the Public Protector and a R10-million bonus scandal‚ but it was a bizarre media conference that eventually brought down former SABC COO Hlaudi Motsoeneng.

Motsoeneng was officialy fired from public broadcaster on Monday‚ following an external disciplinary hearing after being found guilty of misconduct for comments he made at an April 19 media briefing.

In it lashed out at the SABC interim board and in particular at board member Krish Naidoo‚ whom he called a "sell-out".

Motsoeneng was unhappy that the board planned to halt his 90% local content music policy. At the time of the April media conference‚ Motsoeneng was already suspended due to findings made by the Public Protector relating to his qualifications.

During a media briefing on Monday afternoon ‚ interim chairperson of the SABC board Khanyisile Kweyama laid out the reasons for Motsoeneng’s dismissal along with several other changes at the broadcaster.

“They were misconduct. They were bringing the SABC into disrepute‚ and also the relationship breakdown between employer and the employee based on the statements that he made about the SABC board‚ the ad hoc committee in Parliament as well as the judge that presided over some matters‚" she explained.

Kweyama also announced several other changes including the dropping of the SABC’s controversial policy banning the screening of violence in protests against government which was implemented by Motsoeneng shortly before the 2016 local government elections.

Motsoeneng had spearheaded the policy change which was challenged by some journalists at the organisation and called an assault on media freedom.

"We are pleased to advise that we have rescinded that decision as the board and journalists are free to report on what they see fit to report on‚" she said.

The SABC board is also reconsidering the 90% local content policy with Kweyama calling it "a bit drastic".

Kweyama also revealed that the board had officially scrapped the SABC’s controversial New Age Business Breakfast partnership‚ which Parliament had heard was costing the SABC millions while the Gupta-owned newspaper coined it.

"It is normally an eleven-month notice period but we have already started engaging with TNA on cancelling that contract sooner‚" she said.

Another contract that would be halted is the LornaVision contract. The Times previously reported that the SABC’s suspended chief executive officer‚ James Aguma‚ had authorised irregular payments of R10-million to auditing firm PwC and awarded a lucrative contract to debt collection company LornaVision without inviting tenders. LornaVision and PwC were also both flagged in the parliamentary report.

"The other contract is that of LornaVision which has been handed over to the SIU (Special Investigation Unit) for investigation. That is also subject of litigation so I will not comment too much on that as there are papers that have been served and that contract is specifically on the collection of TV licences‚" said Kweyama.

LornaVision is owned by politically-connected businessman Kuben Moodley who is a former special adviser to Mineral Resources Minister Mosebenzi Zwane. The deal would allow LornaVision to create and implement a pilot debt collections system – getting paid a 10% cut of 10‚000 TV licence renewal fees a month.

Activists and politicians have welcomed the decision but say this shouldn’t be the end.

“The fact that the SABC is cutting ties with him is a vital step in our efforts to rebuild the SABC. We believe Hlaudi should pay back the millions he received as bonuses for driving the SABC into the ground‚" said Right2Know spokesman Murray Hunter.

“Why should the public pay for these cases‚” Bird said.

She said the organisation was also keeping a close watch on the investigation into James Aguma‚ who has been suspended as both chief financial officer and acting CEO pending an investigation into procurement and expenditure at the SABC.

“Once that is done‚ we can start with a new set of executives that have the right skills‚” Makuse said.