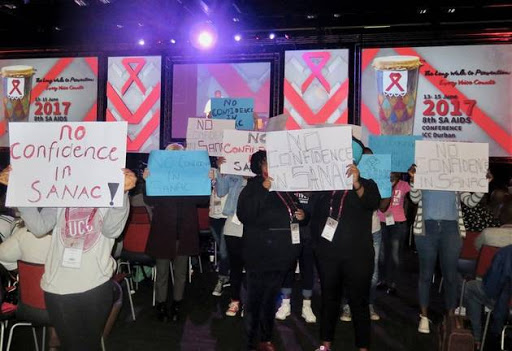 In a statement‚ the organisations said SANAC faces a “crisis of governance and legitimacy”.

“In many cases‚ civil society participation at SANAC has been reduced to irrelevance‚ with the current SANAC civil society leadership unable and unwilling to criticise any weaknesses of service delivery‚” the organisations stated.

They took issue with National Strategic Plan (NSP) that deals with HIV and TB for 2017 to 2022. SANAC guides and coordinates the NSP‚ but the organisations say it “fails to provide the much-needed direction and leadership we require”.

According to them‚ the plan contains low targets for PrEP (pre-exposure prophylaxis)‚ ignores community healthcare workers‚ and fails sex workers by not adequately addressing‚ for example‚ decriminalisation.

Possible financial conflicts of interest amongst the SANAC board of trustees were also highlighted in the statement. “For example‚ the board has also failed to provide satisfactory explanations for funding approved for the organisation of a board member. In addition‚ the recent resignation of two board members has not been explained.” The demonstration was held during the opening address from Steve Letsike who is the leader of SANAC National Civil Society Forum.

Nomo Rangana‚ donor liaison at TAC‚ told GroundUp that the protest was about “drawing attention to the issues within SANAC”.

“We talk about these issues as though the house is in order‚ yet there are problems on the ground‚ and if civil society is supposed to be represented by SANAC and is actually not happy with these issues‚ then it needs to be addressed‚” she said.

SANAC has been asked for comment on the protest. This article will be updated when it responds.