Families prevented from retrieving bodies of deceased due to strike 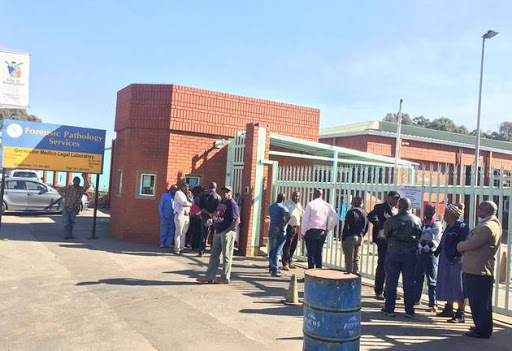 At least 20 family members who have come from different parts of the country to fetch the remains of their loved ones‚ have hit a brick wall as forensic officers have downed tools until their grievances are attended to.
Image: Neo Goba

Distraught families were gathered outside the Gauteng Forensic Pathology Services in Ekurhuleni on Tuesday in a bid to get the bodies of their family members released.

At least 20 family members who have come from different parts of the country to fetch the remains of their loved ones‚ have hit a brick wall as forensic officers have downed tools until their grievances are attended to.

Sandile Gwala‚ who is based in Johannesburg but hails from Maphephetheni‚ northern KwaZulu-Natal‚ said all they wanted was the body of his late friend‚ Ndabezinhle Cedrick Mthethwa‚ so that they could organise themselves to have a post-mortem done on him in Durban.

His friend died on Friday evening after a short illness.

"When we got here on Friday‚ we were told to come back on Tuesday to get the results of the postmortem‚ but we took a decision to come here yesterday (Monday) to actually see if there's any progress with the process so that we don't waste our time on Tuesday‚" said a visibly angry Gwala.

The Cape Chamber of Commerce and Industry has labelled Cape Town commuters who spend hours on congested roads as victims of ''crime and to a large ...
News
4 years ago

"Upon our arrival yesterday‚ the pathologist officers informed us that they are on strike and no body has been assessed and gone for a postmortem. We then enquired about how long the strike would last and we were told that it could go on for a week or even two weeks‚" said Gwala.

The strike comes in the wake of various concerns raised by forensic pathologist officers who downed tools last Friday amid calls for salary upgrades and compensation for doing extra work.

He added that this was unfair to families because in most black cultures‚ a deceased body should not spend more than seven days at a mortuary as it is against their beliefs.

With Friday being a public holiday - Youth Day - Gwala said the downing of tools by the forensic pathologist officers had caused a lot of inconvenience for the family as preparations for the funeral were currently on hold due to the lack of a death certificate.

Gwala was accompanied by the deceased’s younger brother‚ Xolani Mthethwa‚ as well as another family friend‚ Simphiwe Dube.

Contacted for comment‚ National Education and Health Allied Workers Union spokesperson Khaya Xaba said: "The problem with the workers is the job descriptions because the forensic officers are made to dissect bodies and take out body parts which is a job that is supposed to be done by qualified people like doctors who are registered with the relevant bodies in that field‚" said Xaba.

Queuing to survive: Knysna residents after the devastating fires

"Obviously workers have been doing this work for some time which‚ in essence‚ they mind doing but they want to be remunerated for it. As far as I know‚ some workers in certain parts of the country are willing to go back to work and do what is contained in their job description‚" added Xaba.

Xaba said it was now the obligation of the provincial Department of Health to look into the issues of workers being misused to do jobs that they are not qualified for and that the credit goes to the doctors and not the forensic officers.

A Nehawu-affiliated worker based at the Germiston Forensic Pathology Services who spoke on condition of anonymity‚ blamed the provincial Health Department for negotiating in bad faith.

"The implementation of operational specific dispensation (OSD) was implemented in year 2010 which is a problem because it is disadvantaging us in a way. It was wrong because they collapsed the supervisory level which is senior forensic officers and in essence they downgraded us‚" said the forensic pathologist officer.

"From 2011 to date‚ we have never received performance bonuses or increases and this is known by the head of department‚ chief executive and human resources manager‚ Mr Phashe‚" he added.

Contacted for comment‚ department spokesperson Prince Hamca referred TimesLIVE to another person by the name of Khutso Rabothata‚ who said he was in a meeting with senior executive members of the health department who were busy deliberating on the matter.

"The Department calls on FPOs to resume Forensic Pathology Services so as to be sensitive to the bereaved families‚ especially considering the fact that this service is essential and that also serves the interest of justice. The Department is committed to work with the FPOs and their representatives to resolve their grievances within the legal framework‚" the department said in a statement.

"The Department will await the outcome of the National Collective Bargaining process on the issue of scope of practice and the relevant allowance requested by the FPOs. This is an intensive process that takes longer to finalise and it’s fitting that we provide pathology services whilst this process is being engaged‚" the department added.