Mopping up at Cape Town station 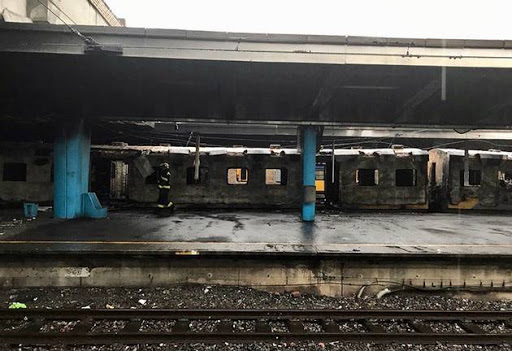 Cape Town central train station was still in disarray on Tuesday morning. Cleaners were busy clearing up the debris from Monday night’s protests.

Firefighters were spraying water around burnt out train carriages. Station employees tried to clean up broken glass and garbage. Officials had roped off rubble-strewn areas‚ including looted shops. Crowds of commuters and onlookers watched.

Protests erupted on Monday after widespread train delays that started in the mid-afternoon left hundreds of commuters stranded in the city into Monday evening.

There were again widespread train delays on Tuesday. At 8:45am‚ GroundUp found commuters who had been waiting since 7am for their trains.

In a statement‚ Metrorail confirmed that eight train cars had been destroyed and platforms 15 and 16 at Cape Town station will be closed until further notice.

This article was published in GroundUp