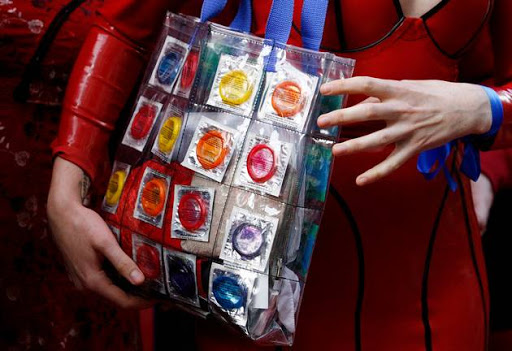 The plan was deemed necessary because of the persistently high rates of infections – the country has the highest TB and HIV rates in the world.

Sex workers are critical to the plan because HIV prevalence among them is extremely high. Research shows that more than half the female sex workers in South Africa’s three largest cities are HIV positive – but less than one-third are on antiretroviral treatment.

Crucial to the plan’s success is the ability of the country to meet two particular goals: implementing the 90:90:90 strategy for HIV (that 90% of people living with HIV know their status, 90% of all people with diagnosed HIV infection receive sustained antiretroviral therapy and 90% of all people receiving antiretroviral therapy are virally suppressed).

The second is that treatment, and other support, is given to vulnerable groups, such as sex workers.

But will the plan work? Some believe not.

One source of criticism has come from sex workers themselves.

Their case is set out in an open letter to the South African National Aids Council (SANAC) written by Zenande Dlamini, a sex worker and activist. Zenande and I are part of a writing collaboration and an arts-based project called Know My Story.

Zenande argues that the plan’s good intentions will be undermined by the fact that sex work remains a criminal offence in South Africa. This means that sex workers remain vulnerable. They don’t have the right to protect themselves – for example from police violence and intimidation – or get the health care they need because they’re stigmatised by health workers.

Her letter comes just months after the South African Law Reform Commission launched a long-awaited report on adult prostitution. The report, delivered 20 years after it was first mooted, failed to address the issue of decriminalising sex work.

My name is Zenande. I am a sex worker. I am from the Eastern Cape. I am many things other than a sex worker: sex work does not define me. But in this context it is important that I classify myself as part of this vulnerable population.

A lot of lip service has been paid to sex workers in the country’s attempt to reduce the number of HIV, TB and sexually transmitted infections. Big, powerful meetings have been conducted to try and find solutions to our issues, especially in the field of health rights. I am grateful for that. And I see how well-structured the South African National Strategic Plan on HIV, TB and STIs is for the next five years.

Your policy promises that vulnerable populations will get counselling from peers as well as support to stick to treatment regimes and information sharing. This, the plan says, will happen across the country.

But there’s no sign of it happening, nor do I think it can happen, especially in my birth province where poverty is rife.

Who is expected to make the 90-90-90 strategy work? Firstly, there are only two or three organisations that dedicate their energy to key populations. This is the case even in heavily populated provinces like Gauteng and the Western Cape.

Secondly, there are only a small number of peer educators across the whole country. They are expected to reach out to marginalised groups in rural areas.

On top of this, there are only a limited number of NGOs dealing with vulnerable people in provinces like the Eastern Cape. That’s where I work as a peer educator. My experiences have led me to voice my frustrations in this letter.

If the government really wants to improve testing and treating TB, HIV and other sexually transmitted infections it has to do more than just address health issues. It must empower organisations working with sex workers to address problems around gender based violence and human rights violations.

Change will only happen when peer-led organisations are supported more.

Your policy identifies drug use as one of the critical drivers of HIV, TB and sexually transmitted infections.

But there are no drug rehab centres that can work with my population to deal with drug abuse in the industry.

In addition to drug rehabs, sex workers need help to get out of the industry, if that’s what they want. At the moment they’re trapped. There are no programmes to help them exit the industry, for up-skilling, for bursaries.

Until this changes, nothing will change.

If I had the means, I’d give sex workers skills so that they had a plan B.

And then there’s the issue of decriminalisation.

I often hear the word criminal when it comes to sex work. Sex work is work. But until it is decriminalised, sex workers will remain victims of anyone who wants to boost their egos by beating us, raping us, abusing us and killing us.

And it’s not just clients we have to fear. We have condoms continuously confiscated by members of the South African Police Service – condoms that the health sector delivers to us.

Sex work needs to be decriminalised.

My own experience tells a story. I have tried to find other means of employment as I didn’t want to be on the wrong side of the law. I had dreams of being a nurse. I passed my matric and I applied for bursaries six times, without success. I had to drop out of varsity. I had to support two siblings and my own daughter. I had to protect my loved ones.

I would like to know: what crime have I committed? By rendering a consensual service to a client who needs it, I am a criminal. By ensuring that my siblings and my single mum have food on the table, I am a criminal.

This article was first published on The Conversation.