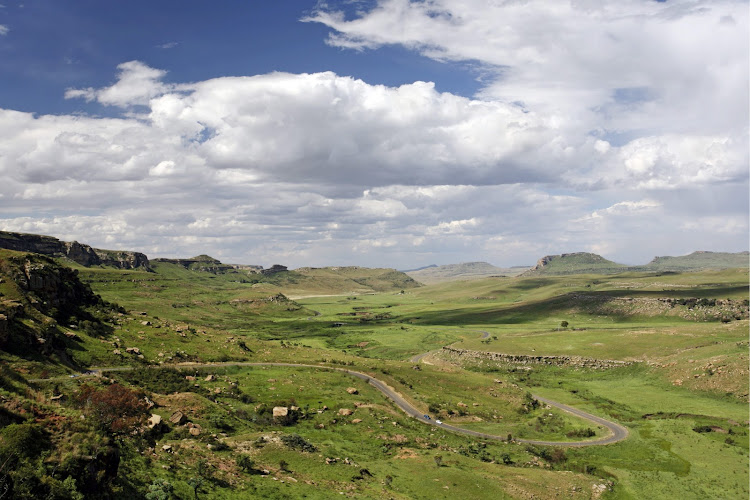 A shale gas exploration project in the area surrounding the Golden Gate Highlands National Park has left environmentalists concerned about the prospect of fracking on the doorstep of Clarens.

Environmentalists have raised concern over an application to explore for shale gas across a large swathe of land in the Free State and KwaZulu-Natal - with a part of the application area surrounding the national park on every side except for the section that borders Lesotho.

If it's going to happen next to a national park, it will be an absolute disaster.

The government has suggested that fracking could be the answer to the country's energy needs.

While some experts have said that natural gas could be worth R11.2-billion to the economy and could create as many as 30000 jobs, environmental and lobby groups warn that it could severely affect water quality, damage farms and destroy tourism.

While the exploration, by Rhino Resources, is for a desktop study - meaning that no actual fracking or physical exploration for gas deposits will take place at this stage - environmentalists warn that it could be the first step to seeing mining go ahead.

In separate applications, the company has also applied to conduct exploration in an area covering an estimated 40% of KwaZulu-Natal. Phillip Steyn, CEO of Rhino Oil and Gas, the South African arm of Rhino Resources, said application 158TCP - which was approved by the Petroleum Agency of SA - would allow the company to study the entire area "to assess the prospectivity from all available existing data".

TCP stands for "technical co-operation permit", and does not grant permission for physical prospecting.

"As this is only a desktop study there are no environmental concerns," said Steyn.

Fracking will be bad news for nunus: experts

But Endangered Wildlife Trust senior field researcher Bradley Gibbons warned that while there was no fracking planned for now, such an application could have consequences down the line - and said that fracking would be calamitous for the affected region. Not only is the area crucial for the country's water supply, there were also tourism implications, he said.

"If it's going to happen next to a national park, it will be an absolute disaster. I just love the area around Clarens; it's marvellous and beautiful. Imagine seeing pipes coming from the ground [if fracking happens]. The thought gives me nightmares," said Gibbons.

"That whole place depends on tourism. Just try to book a hotel on a weekend ... it's fully booked. People won't come back if there are big pipes and stinky smells. There will be a tourism impact," he said. 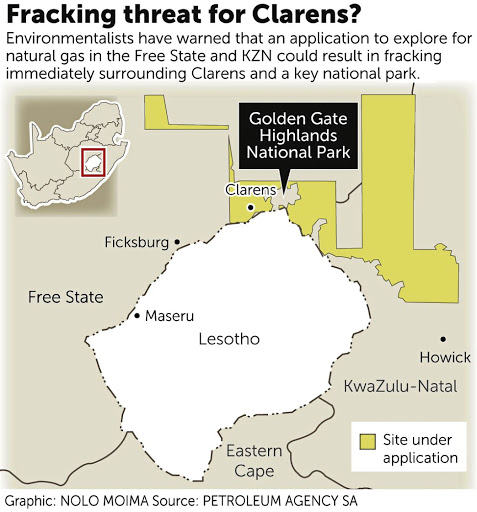 Gibbons added that water quality could be badly affected.

"This whole concept of 'water comes out of a tap' is all that matters to people. But that's not the case. Water comes from places like this. When you look at the water [in mining areas], you often see black water from coal mines - and it'll be the same from fracking," he said.

Gideon Groenewald, a ground water consultant and Clarens resident, said fracking would mean residents would have to choose between gas and fresh water.

"This poses a threat to fresh ground water. The gas [methane] extracted overpowers the water thus making it poisonous, radioactive and people who drink such water have a risk of going blind," said Groenewald.

"The distribution of people to land is highly dependent on the availability of fresh water. Where must the people get water if this sacred source is tampered with?"

First it was the Karoo, where energy companies wanted to explore for gas reserves - believed to be extensive. But farming, water resources, tourism ...
Ideas
4 years ago

Judy Bell from FrackFree South Africa said the organisation was concerned about the ecological, health, social and economic effects that would result if the exploration process led to fracking.

"It is unacceptable - there's a risk of contamination of ground water in an already water-stressed environment.

"Despite assurances from potential extractors that the technique is safe, evidence of failed safety measures and resultant contamination is increasingly common in areas where fracking has been approved," said Bell.

Attempts to get comment from the Petroleum Agency SA were unsuccessful.