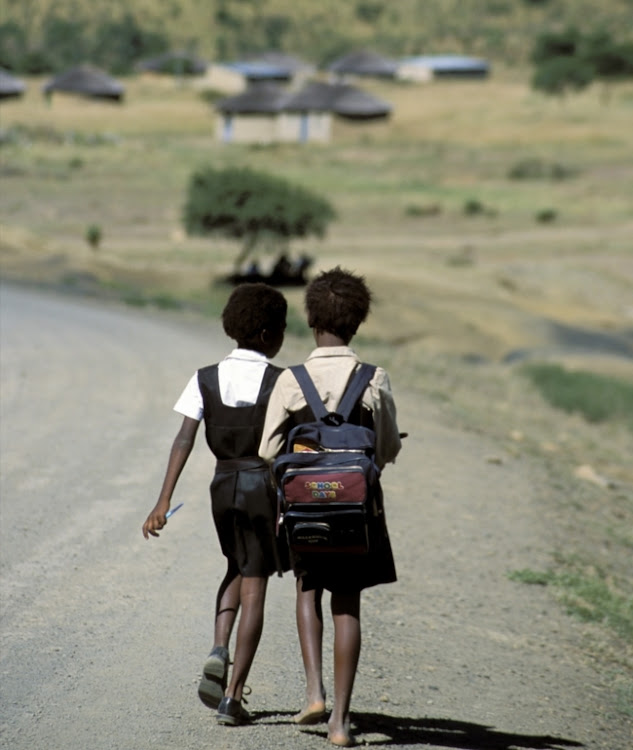 Every morning‚ Ntombi takes the 90-minute walk to school in fear.

She isn’t scared of having to negotiate a gravel road or crossing over the top of a mountain‚ but it’s the threat of being attacked that keeps her on edge. And this isn’t an abstract threat – it’s something that so nearly happened to her.

Ntombi‚ which is not her real name as her identity has been protected‚ related her near-rape in an affidavit presented to the Pietermaritzburg High Court last week. The case‚ brought by lobby group Equal Education‚ wants to force government to provide scholar transport to pupils in KwaZulu-Natal‚ particularly targeting schools around Nquthu in the far north of the province.

“I walk on [a] gravel road that crosses over mountains. The walk is long and tiring. I feel unsafe when I am walking. Last year I was forcefully taken by three men … into a car outside school. They threatened to rape me.”

She relates how she was able to escape‚ but injured her arm in the process.

“Some people who were around me were able to help and called an ambulance and police. I was taken to hospital. I tried to report it to the police‚ but nothing was done. The men who attacked me still follow me. Every day I feel afraid when I am walking. I am afraid that they will rape me‚” she writes.

Hers is not an isolated story. Several other pupils at schools in Nquthu relate similar tales of early wake-ups‚ long walks – complete with river and mountain crossings – and the fear of being attacked. They also say how hot‚ cold and windy weather affects them. Many are unable to get to school when adverse weather hits.

The men who attacked me still follow me. Every day I feel afraid when I am walking. I am afraid that they will rape me.

When they do get to school‚ they are often unable to concentrate.

One pupil‚ who was in Grade 10 at Ngwane High School‚ said: “I struggle to concentrate in class and I sometimes sleep.”

Now Equal Education wants to force government to do something about the situation.

In the founding affidavit contained in court papers‚ Ntuthuzo Ndzomo‚ Equal Education’s deputy general secretary‚ says the organisation is representing 12 schools in the Nquthu area. All of them qualify for learner transport but have been denied it by government‚ with a lack of money blamed.

The court action‚ she said‚ is to have the lack of scholar transport deemed to be a violation of pupils’ right to education.

“This state of affairs … impacts negatively on these scholars’ attendance and performance at school and their rights are being violated on a daily and ongoing basis. The right to basic education remains illusory for these scholars in these circumstances‚” her affidavit reads.

Should they win‚ the judicial precedent would be used to force similar action by government in other provinces‚ said Equal Education spokeswoman Leanne Jansen-Thomas.

“The case would confirm that scholar transport is a component of the right to basic education and that government must ensure effective measures to achieve its realisation. This will be important for scholar transport provisioning across the country. If successful‚ Equal Education would consider litigating to remedy the systemic barriers in other provinces‚” she said.

KwaZulu-Natal education department spokesman Muzi Mahlambi confirmed that the department would respond to the litigation.

"We are respondents to the court papers. We will deal with the matter as such‚ not via any [other] channel‚" he said.

Grade 10 boy at Ngwane High School‚ dated November 2015: “I walk about two-and-a-half hours to school every day. I usually walk with about 15 other students at Ngwane‚ including my brother and sister. I walk mainly along a gravel road‚ over hills and mountains. I have to also cross Vamankala River to get to school. I wake up at 4am. I usually leave home at about 5am. I arrive at school after 7.30am and I am always late for assembly. When I get to school‚ I am tired and sometimes hungry because I have been walking for so long. We only get our meals at school around 11am. I struggle to concentrate in class and I sometimes sleep.

Sometimes I don’t have time to do my homework because I’m too tired and I try to do homework at school.

"When I am walking to school and if it rains I get wet and my books get wet. If I haven’t left home yet‚ then I wait for the rain to stop. When there is lightning‚ I do not go to school. There are taxis on the route to school but they have to be paid and I don’t have the money because we use the money for my schools and uniform. It would cost me R300 per month to take the taxi. School finishes at 3pm every day and I arrive home around 5.30pm or 6pm. I arrive very tired. I have chores when I get home and then have to do homework‚ then I sleep.

"Sometimes I don’t have time to do my homework because I’m too tired and I try to do homework at school. I go to bed at 9pm every day. I am repeating [Grade] 10 this year. I found it very hard to concentrate in class last year. I think it is because I am always tired from the long walk to school.”

Grade 10 boy at Hlubi High School‚ dated November 2015: “The journey to school can be difficult. In winter it is very dark and I get scared at times. In our area there has also been a strange car that has been rumoured to kidnap children. The area I walk in has vast open spaces and when the summer rains come and the lightning storms hit it cam be very frightening.

"There is no shelter on my route and I have to walk through the rain. There are taxis that are operating in our area. They are far from my home‚ though‚ and they cost R15 per trip. This is unaffordable for my family. Scholar transport will certainly help our school and learners perform better.”

Grade 10 boy at Mgazi High School‚ dated November 2015: “I wake up at 4.30am and start preparing for school. My morning routine includes taking the cattle to the fields. I then go back home and leave the house around 5am. I arrive at school at about 7am. We walk in a group of about 8 friends. We walk on a gravel road. We have to cross two rivers and a … hill to get to school. There is no bridge over the river and we have to use the stones in the river to step on when we are crossing.

"When it is hot‚ we arrive at school tired. When it rains the river gets full and then we have to walk around the hill. That detour extends our journey by another 30 minutes. The journey is not safe. There are gangsters on the route and there have been muggings. There is no one to help if there is a problem with the gangsters. Sometimes if I have to walk alone‚ I am very afraid. School finished at 2.45pm. The walk back home takes around 2 hours. Again we walk in a group because it would be too dangerous to walk alone.”

- These examples are contained in court papers filed by Equal Education in the Pietermarizburg High Court.