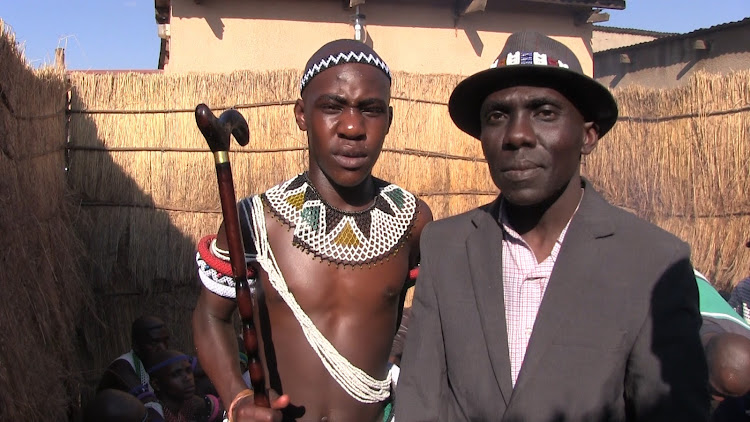 Isaac Mahlangu could not contain his pride and joy as his son‚ 20-year-old Abel‚ returned home after 62 days at a nearby initiation school in Witbank‚ Mpumalanga.

Isaac Mahlangu could not contain his pride and joy as his son‚ 20-year-old Abel‚ returned home after 62 days at a nearby initiation school in Witbank‚ Mpumalanga.

When Abel left home‚ he was regarded a boy but when he returned on Monday‚ he was a man - ready to tackle responsibilities and make life changing decisions.

Abel Mahlangu and several other initiates descended the mountains on Monday morning, marking an end to their initiation process. Subscribe to TimesLIVE here: https://www.youtube.com/user/TimesLive

“He can now choose to officially have a girlfriend. He can make his own choices in terms of the friends he wants to keep‚” said his father.

He was so proud his son had chosen to follow in his footsteps to go and learn what it truly means to be a Ndebele man.

Had he chosen not to go‚ he would have never really been regarded as a man by the Ndebele clan‚ Mahlangu told TimesLIVE.

“While others may regard him as man out there‚ amongst us‚ the Ndebele nation‚ he wouldn’t be‚” said Mahlangu.

The Mahlangus‚ just like the Mabenas‚ are regarded as being royalty among the Ndebele people.

And on Monday‚ it was evident that a relative of a king had returned home.

When we arrived at the Mahlangu homestead earlier on Monday‚ the yard was a hive of activity.

A white flag hung on a corner of the make-shift hut built in the Mahlangu home.

Blood from a recently slain cow oozed down the driveway.

The head of the cow lay on the one side while its body was being skinned and chopped up by a group of men.

Abel’s father took the gall bladder from the carcass and headed to the nearby thatched hut built outside his home where his son and some of his friends sang in celebration following their return.

Affirming that his son was now a man‚ he poured the contents of the gall bladder over his son’s hands and feet before being aided in wrapping the then empty bladder around his son’s wrist.

“That was to show that he has completed the process‚” said his proud father.

Meanwhile‚ the six boys in the hut‚ built without a roof sang loudly in celebration‚ fuelling the festive mood which lingered in the air.

Their bare bodies and bald heads glistened in the sunlight as they danced and sang. Colourful strings bound together around their waists as a covering shook from side to side as they raised their canes and spears and bellowed traditional songs.

Outside their hut a group of men sat around with some drinking tea and munching homemade cookies‚ while others sipped on traditionally brewed beer as they nibbled on meat brought out ever so often on round metallic dishes.

In the house‚ the festivities continued‚ as women with blankets draped over their shoulders manned the “drie-voet” (three-legged) pot cooking over the fire.

The women sang in jubilation‚ also sipping on the homebrewed beer.

“It took quite a while to get here‚” said Abel’s mother‚ explaining that they had spent the entire week baking for this occasion.

Festivities were to continue at the Mahlangu household until Tuesday when Abel would then accompany his friends to their homes and repeat the same process that he had gone through.

On Tuesday‚ his family was to present him with gifts‚ celebrating the milestone.

“He will be getting a bed‚ new clothes and whatever else we decide to give him‚ perhaps also a laptop‚” said his father.

According to customary practice‚ Abel is meant to do away with all the clothes that he wore before his initiation process began and start wearing new clothes‚ symbolising that he is now a grown man.

“But it depends on the family’s ability to do this for their child. At times‚ they cannot immediately buy the cow or the clothes but then they have to do it later‚ when they can‚” said Judas Mtsweni and his assistant‚ Mduduzi Masemola.

He took care of the initiates while they were up in the secluded initiation area‚ giving them food‚ water and teaching them the sacred ways of the Ndebele people.

Mtsweni says for he has been doing the initiations for the last three years.

“The only challenges that we face are with the weather when it is sometimes too cold or it rains‚” he told TimesLIVE.

All of the boys he had under his care returned home safely.

Mtsweni said he attributes that to doing things right and ensuring that his initiates are well fed‚ hydrated and looked after.

Asked how they feel following their return‚ the boys replied: “We are happy. It was fun‚” adding that they had learnt the importance of respect.

Between themselves and their two caretakers‚ a life-long bond had since been fostered.