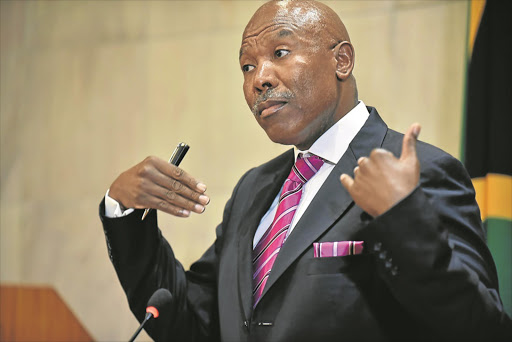 “The Public Protector has no power to amend the Constitution‚ let alone instruct Parliament to do so‚” argued SA Reserve Bank Govenor Kganyago in the founding affidavit.
Image: FREDDY MAVUNDA

Governor of the SA Reserve Bank Lesetja Kganyago on Tuesday filed an urgent application in the North Gauteng High Court to set aside remedial action proposed by Public Protector Busisiwe Mkhwebane in her report on the Bankorp bailout.

Earlier this month‚ Mkhwebane presented her findings regarding her investigation into the SA Reserve Bank’s assistance to Bankorp between 1985 and 1995.

Former governor does not mince words: the Reserve Bank is under attack from a fellow constitutional agency
Business Times
5 years ago

Mkhwebane referred the matter to the Special Investigating Unit to approach President Jacob Zuma to reopen and amend a proclamation published in 1998 in order to recover misappropriated public funds “unlawfully” given to Absa bank.

Absa maintained that it met all its obligations in respect of the loan provided by the South African Reserve Bank to buy Bankorp by October 1995.

Mkhwebane said the correct amount of the illegal gift granted to Bankorp Limited/ABSA Bank was in the amount of R1.125-billion.

In her report she said the South African government and the Reserve Bank failed to protect the public interest by bailing out Bankorp between 1985 and 1991.

She also recommended that Parliament amend the Constitution so that it stipulates that the Reserve Bank’s primary objectives include protecting citizens’ socio-economic conditions.

The recommendations Mkhwebane made on the Constitution attracted criticism from the business community and the African National Congress‚ all saying she overstepped the line.

Parliament has already indicated it would take the Public Protector’s report on judicial review.

Absa also plans to do the same as it disagrees with both her findings and the recommendations made.

The SA Reserve Bank now wants the High Court to set aside Mkhwebane’s recommendations as it says they are unlawful and not within her powers.

“In the impugned remedial action‚ the Public Protector instructs Parliament to amend the Constitution to strip the Reserve Bank of its primary function – to protect the value of the currency.

“The Public Protector has no power to amend the Constitution‚ let alone instruct Parliament to do so‚” said Kganyago argued in the founding affidavit.

“From the moment it was announced it had a serious and detrimental effect on the economy and for as long as it remains in place‚ it holds the risk of causing further rand depreciation‚ further ratings downgrades and further capital outflows‚” Kganyago.

He further argued that the Reserve Bank was given an autonomous role to protect the currency‚ because the long term price stability may come into conflict with a government’s shorter-term goals.