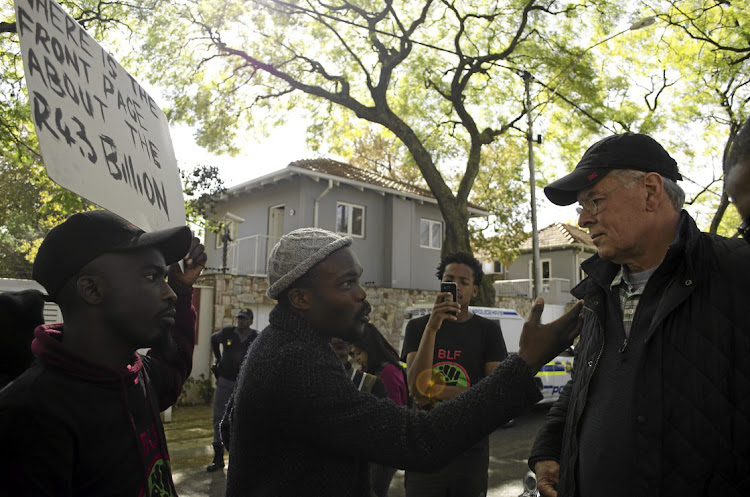 Hurling insults and holding placards, the group of about 20 vandalised Bruce's garage door, writing "land or death" in big black and blue letters on the roller-door.

They told Bruce to pack his bags and go back to Europe, saying they wanted to occupy his home, which they claimed had been built on stolen land. Cohen, who has been the editor of the paper since February last year, was manhandled when he arrived at Bruce's house.

Attack on journalist is an encroachment on freedom in SA

Yesterday Business Day published a column by its former editor, Peter Bruce, on how he has been harassed since writing articles critical of the Gupta ...
Ideas
4 years ago

"My intention was to go to check if Peter was alright because he's a columnist for Business Day. Upon my arrival, I took out my cellphone to take a photograph of the protesters and they just went nuts," said Cohen.

"The police separated us and then Peter came out so it was clear he was OK. I decided not to inflame the situation so I left."

Bruce said he had no doubt that the attack was linked to an opinion piece that appeared in Business Day yesterday in which he wrote that he had been targeted by the Gupta family for writing articles critical of them.

There was a passing mention of Black First Land First leader Andile Mngxitama in the column.

Tiso Blackstar Group, formerly Times Media, which publishes Business Day, said: "We are appalled by the attempted intimidation of Peter Bruce. It is an outright threat to journalism that we should not laugh off as [the work of] a handful of lunatics making a noise. It is part of a concerted campaign to intimidate that should be condemned in the strongest terms by anyone who supports the freedom of the press.

Business Day editor Tim Cohen was assaulted by the Black First Land First movement on Thursday‚ the second senior journalist to be targeted by the ...
Politics
4 years ago

"As a media company at the forefront of exposing state capture and, most recently, revelations from the Gupta e-mails leaks, we will not be bowed by these bullying tactics."

SA National Editors' Forum director Chris Kabwato said the forum "condemns unreservedly the intimidation and threats against journalists Peter Bruce [and Tim Cohen]. Media freedom is
protected by the constitution and Mr Bruce has exercised his right to express himself.

"We also condemn the invasion of Mr Bruce's personal life as part of a cowardly act to silence him.

"We encourage Mr Bruce to report the perpetrators to the police. Journalism is not a crime. State capture is."

"He is selective when he writes his opinion piece. He does not write what is truthful, factual and he doesn't investigate. He just writes what is in his racist mind and we don't accept that as black people and also as the BLF movement," said Thandiswa Yaphi, treasurer of the organisation.