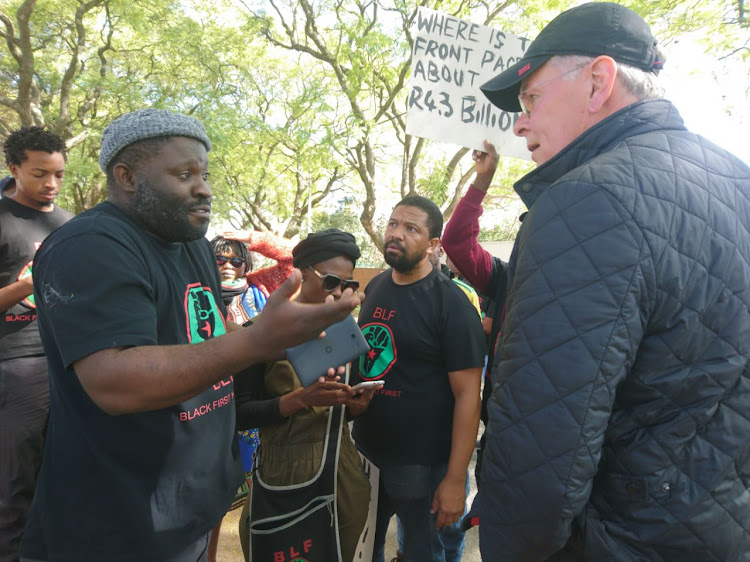 The South African National Editors’ Forum (SANEF) is to apply for an urgent interdict to stop Black First Land First (BLF) from harassing and intimidating journalists.

SANEF had given the group‚ which allegedly has links to the Guptas‚ until 12 noon on Saturday to give assurances that it would stop harassing‚ threatening and assaulting journalists‚ however‚ the movement declined.

This followed a protest by about 20 BLF members outside the Parkview home of Tiso Blackstar editor-at-large Peter Bruce on Thursday during which he was threatened over an article he wrote about the Guptas. BLF members also assaulted Business Day editor Tim Cohen outside the house.

This was followed by a statement by the organisation on Friday threatening a number of white journalists – among them Peter Bruce‚ amaBhungane's Sam Sole‚ News24 editor Adriaan Basson‚ 702 presenter Stephen Grootes‚ News24 columnist Max du Preez‚ Eyewitness News' Barry Bateman and Biznews editor Alec Hogg – accusing them of racism‚ publishing fake news and covering up “white corruption under the guise of journalism” .

Next is @KatyKatopodis we shall pay her a visit, you can't talk shit about BLF and get away

“… our message to them is that they must repent‚ ask for forgiveness from black people for being used by white monopoly capital. They must stop their askari tendencies or face the possibility of being mistaken for white journalists‚” BLF warned.

Business Day editor Tim Cohen was assaulted by the Black First Land First movement on Thursday‚ the second senior journalist to be targeted by the ...
Politics
5 years ago

On Saturday‚ News 24 Adriaan Basson tweeted that the organisation was now threatening to go to the house of Katy Katopodis‚ updates editor at Eyewitness News (EWN)‚ and that SANEF was now preparing its interdict application.

Verwoerd would have been proud of you, BLF. Many of us reject facism, now & then. https://t.co/HgQAk0vBsK via @black1stland1st

“So‚ we are no moving on to apply for an interdict to stop BLF from harassing the journalists listed‚” Kabwato said.