He vows to sue after pic of fracas goes viral 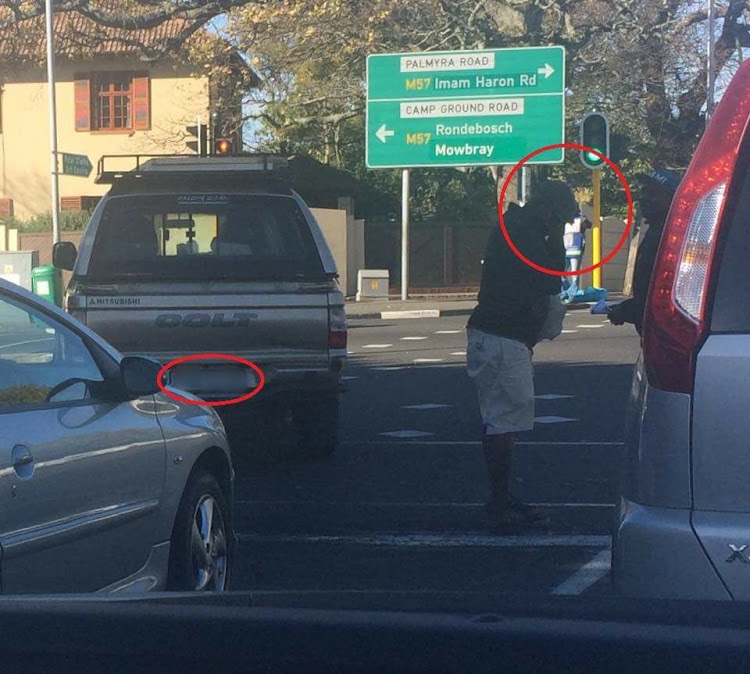 This image, shared on Facebook, shows the aftermath after a beggar in Cape Town was allegedly sprayed with pepper-spray.
Image: Facebook/Renee Venter

A homeless man who claims he was pepper-sprayed by an angry motorist is intent on laying criminal charges.

A picture taken last week by Renee Venter, moments after the man was allegedly sprayed at a Claremont junction, had been shared more than 1,000 times on Facebook by Sunday.

Thandabantu Plaatjie, 36, collects rubbish from passing motorists and disposes of it in return for "whatever they feel like".

He has been standing at the intersection since he moved to Cape Town from Alice, in the Eastern Cape, two years ago.

He said he was hurt and felt stripped of his dignity.

"I expected the motorist to give me money but he lowered his window and drenched me with pepper spray," he said.

"I could not see anything afterwards and then one of the guys who sells jokes here helped me off the road. He washed my eyes with water. After that, a white woman came to me and said she saw everything.

"She took down his registration number and took a picture of him."

"My eyes were burning. I can't even recognise him. I was very hurt but I hope that, with his details, I will be able to report him to the police. I have been doing this for two years and I have never caused any trouble."

Venter said she had been waiting in traffic when she saw the incident.

"I saw the homeless man standing at the bakkie and the driver had his window open. I saw they were talking and all of a sudden I saw the driver stick his arm out of the window, holding a small white canister with a nozzle," she said.

"I saw him spray something into the man's face and he immediately stepped back and started clutching his eyes. Another man handing out pamphlets went to him and was trying to help him to the side of the road."

She added: "I don't know what was in that canister but the man definitely sprayed something into his eyes."

Gregory Dunn, the alleged driver, denied he had sprayed the vagrant.

"I didn't spray him with pepper spray. He put his hands inside my car so I chased him away," he said.