Gemma, the cat with nine lives who found a way home after Knysna fires 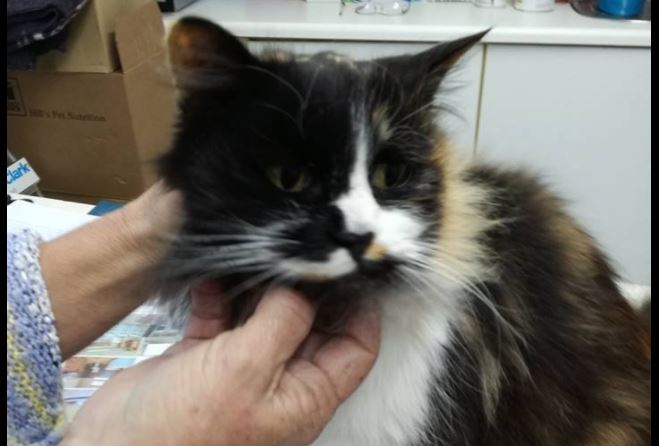 Gemma the cat, whose paws were burnt during the Knysna fires, has been returned to her humans.
Image: Knysna Animal Welfare Society via Facebook

Gemma‚ the tenacious cat who found her way home six days after the fires‚ was one of the hundreds of pets caught up in the disaster that left parts of the Garden Route devastated a month ago.

Her story‚ unlike many of the pet casualties caught up in the inferno‚ had a happy ending.

“The feeling was indescribable when I saw Gemma again‚” said Lelanie Du Toit. “When the fire came Gemma was missing. Because she loved the outdoors I knew she was somewhere in the backyard but I couldn’t find her so I had to leave her behind with tears in my eyes. We have had her for 16 years and she is part of the family”.

After the fires, the latest deadly threat facing people on the Garden Route is asbestos.
News
5 years ago

Aid organisation Gift of the Givers on Friday paid tribute to victims of the devastating Knysna fires‚ which ripped through large swathes of the ...
News
5 years ago

A major problem fighting the massive fires that ravaged Knysna was the lack of communications and electricity outages‚ said local councillor Mark ...
News
5 years ago

Du Toit said that she and her family had made peace with never seeing Gemma again until one day they heard cat noises at the back door. Gemma had crawled back home with severely burnt paws.

Animal welfare centres were filled to capacity as families lost or were forced to evacuate their homes‚ not knowing what to do with their beloved pets.

Residents coming to terms with the long term consequences of losing their homes – having to stay in rented or temporary accommodation – are now being forced to put their pets up for adoption.

The Knysna Animal Welfare Society‚ inundated with pets‚ had to ask for assistance from the SPCA in George which in turn called other branches to help as the task to save the animals became near impossible.

Anneline Kitley‚ manager at the Knysna Animal Welfare Society‚ said the initial outpouring of help after the fires was tremendous but now many who lost their homes did not know what to do with their animals.

“We had a lot of animals that we had to look after because the owners were looking for other accommodation. Everybody just opened their hearts for people to come and stay with them and obviously not thinking long term and that it might be a problem later on. They need to look for other homes for their animals because they have lost everything‚” said Kitley.

She said that their small facility could normally only house 60 animals at a time but were caring for twice as many. The centre runs as a hospital and place of recovery for the fire victims.

“We have two cats whose owners’ homes burnt down and they just realised that wherever they try to get a place to live‚ whether it is at a B&B or at a guest house they can’t bring their animals so they asked us to look for a home for the cats‚” said Kitley.

“Some of the animals here are still recovering from their burn wounds‚ the owners come in regularly to visit. These animals are still with bandages around their feet so we keep them here and nurse them back to health‚” said Kitley.

Noreen Sass‚ a nurse with four decades of experience who specialises in wound care‚ helped to treat the burnt animals.

“I went around to the vets to show them how to treat burn wounds. I would use the dressing I would use on human patients on the animals” she said.

Many of the burns were only treated a week after the fire because animals had fled and only returned later.

“Some of them really suffered serious burn wounds and others’ wounds were so bad that they had little to no chance of survival. We decided to euthanise these animals. The feet of the animals had the most burn wounds because they walked on coals‚” said Sass.

Salome Bruyns‚ senior Inspector for the SPCA Garden Route‚ said: “We travelled to and fro between George and Knysna every day for two weeks to see if there were any animals roaming the streets. The fire was so intense that some animals escaped from their homes and only after the fire subsided‚ which was a week later‚ did they come out of hiding‚ seriously injured.

“We walked in the plantations and on farms where we would find pigs and cows that had died. A lot of people who locked their animals in their homes during the day said that when they returned home they found their homes burnt to the ground with the animals inside.”

Bruyns said that a lot of animals still remain missing four weeks after the fire. Owners do not know if their pets are dead or alive.