Alleged 28s gangster drives himself to clinic with gunshot wounds 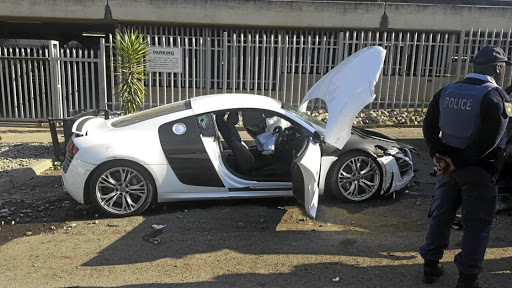 Stanfield, believed to be leader of the 28s gang, was hit up to 14 times when gunmen opened fire on his car, a white Audi R8 with Gauteng numberplates, in Melrose Arch.

It is understood he was wearing a bulletproof vest.

"There were two people in the car. A 37-year-old man was shot several times in the upper body in a drive-by shooting," he said.

Masondo said Stanfield drove himself to the nearest hospital but lost control when he arrived and hit three cars.

The R3.3-million supercar ended up with its nose buried in the side of a Ford Figo parked on the street outside the entrance.

The spokesman would not reveal which hospital, saying police feared the would-be assassins would go after him.

However, photographs of Stanfield's damaged car on social media made clear it was MediClinic Morningside.

Is this 'kingpin' the queen of tik on Cape Flats?

The photographs show a bullet hole in the small window next to where Stanfield's head would have been.

"At this stage the police have launched a manhunt and are looking for the suspects," said Masondo.

Stanfield's wife, Nicole, told
the Daily Voice she was on her way to Cape Town International Airport to catch a flight to Johannesburg.

Her husband is the fourth alleged Cape Town gang boss shot in the past two months.

Stanfield is the nephew of gangland kingpin Colin Stanfield, who died of cancer in 2004. He was acquitted of fraud, corruption, possession of unlicensed firearms and contravention of the Firearms Act last year.