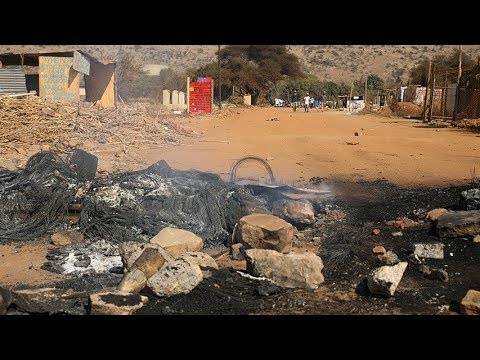 Promises and lies are what Gomorrah residents say they have received from the Tshwane municipality instead of services and now they are fed up.

For almost a decade they have occupied the previously privately owned piece of land in Pretoria West.

Their pleas for housing‚ electricity and water have previously fallen on deaf ears.

"We have heard enough of your stories. Time for talking is over. If nothing happens‚ we will break your head next time you come here‚" shouted one man as Gauteng's chief director for water and sanitation‚ Joshua Ngonyama‚ who addressed the angry residents. Ngonyama told the agitated residents that the municipality had been unable to provide services as the land was privately owned.

He however said the provincial government had since bought the land for more than R100-million.

"The only thing that was remaining was to give Tshwane municipality the power of attorney to be able to provide services‚" he said.

Ngonyama said the power of attorney would have been completed by the end of Thursday as instructed by Gauteng MEC for human settlement Paul Mashatile.

He said there were more than 8000 shacks in the area.

Living next to this volatile informal settlement has proven to be a terrifying affair for residents of Hercules‚ with their homes targeted when violent service delivery protests flare up.

Residents say they lived in relative peace for decades until the squatters moved into the empty piece of land about 10 years ago.

Not only are their houses pelted with stones and walls damaged‚ traumatised children lock themselves inside in fear.

"They throw stones at my house‚ set electricity poles on fire and damaged my water meter. We haven't had electricity since Wednesday night‚" said a frustrated man who lives right on the edge of the informal settlement.

The man‚ who did not want to be named‚ said he had no problem living next to Gomorrah but was concerned about the protests. He has lived in Hercules for more than 30 years. His neighbour‚ who only identified himself as Pieter‚ said his children feared coming out of the house.

The windows of his house were smashed and his wall damaged as Gomorrah residents went on rampage in the early hours of Thursday morning.

"It is not only that. There are drugs‚ alcohol and theft from our houses. I have stopped reporting to police as nothing happens‚" he said.

Calm was restored in the area around noon after residents burned five vehicles‚ including a truck‚ as well as several buildings in the Tshwane University of Technology's horticulture department which also houses the Tshwane municipality's environmental division's offices.

Earlier‚ Gomorrah residents blocked the busy Bremer Street towards the Daspoort tunnel before they were pushed back into their settlement in a hail of police rubber bullets.

They then retaliated by breaking into the horticulture facility‚ looting foreign owned shops and breaking into a local shebeen where they helped themselves to quarts of beer.

Community leaders said they will wait for the power of attorney and take it themselves to Tshwane municipality headquarters in the Pretoria CBD on Friday.

"The protest is not over. We don't want explanations‚ we want action. We will continue protesting till we see the power of attorney‚" deputy chairperson of SA National Civic Organisation‚ Mantladi Nkadimeng said.

The Daspoort tunnel - a major interlinking route between Pretoria North‚ Hartebeespoort and the CBD - in Pretoria West has been a constant target for residents to voice their frustrations‚ with the most recent protest in March last year.