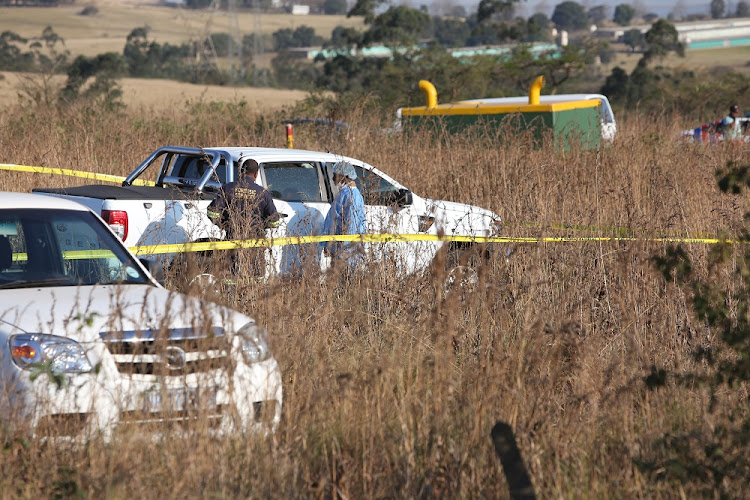 Police at the scene where a taxi boss who was shot , lost control of his Ford ranger and veered off the N3 where he died after killing a child pedestrian as he lost control.
Image: Jackie Clausen

A 10-year-old Durban girl had nothing to do with the gunshots and drama that unfolded around her - but she would be the biggest casualty.

The girl‚ who has not been named‚ was collateral damage in a bloody drive-by hit on Tuesday. She was run down and killed by a wounded and dying taxi boss who was trying to escape his killers.

The girl had been walking at the roadside on the N3 near Camperdown with her mother when they were hit by the out-of-control bakkie driven by the chair of a local taxi association. He and a passenger had been wounded when a car drew alongside theirs on the freeway and sprayed the vehicle with automatic rifle fire. Police spokesman Lieutenant-Colonel Thulani Zwane said that the hit-style murder appeared to be related to taxi violence.

“The driver of the bakkie is the chairman of an association and he owns taxis. The incident occurred shortly after noon‚” he said.

"The driver and passenger were attacked by occupants of the VW golf while they were driving on the freeway. The car came alongside them and then starting shooting at them."

The bakkie is understood to have collided with another car and then veered from the roadway‚ hitting the woman and child and then pushing into the veld. The girl and the taxi boss died at the scene.

“The injured were treated and taken to hospital. Police are investigating two cases of murder and two cases of attempted murder. Detectives are still busy processing the scene‚” he added.

Residents in Soweto left frustrated due to shutdown of taxi ranks

Residents in Soweto have been left frustrated after the Gauteng provincial government shut down five major taxi ranks.
News
4 years ago

More than 30 agitated taxi owners under the Nanduwe association gathered at Mofolo Crossroad's Shell garage in Soweto on Thursday morning‚ guarded by ...
News
4 years ago

The Johannesburg Department of Roads and Transport is confident that the impact from the closure of five Soweto taxi ranks will not be as grave as it ...
News
4 years ago