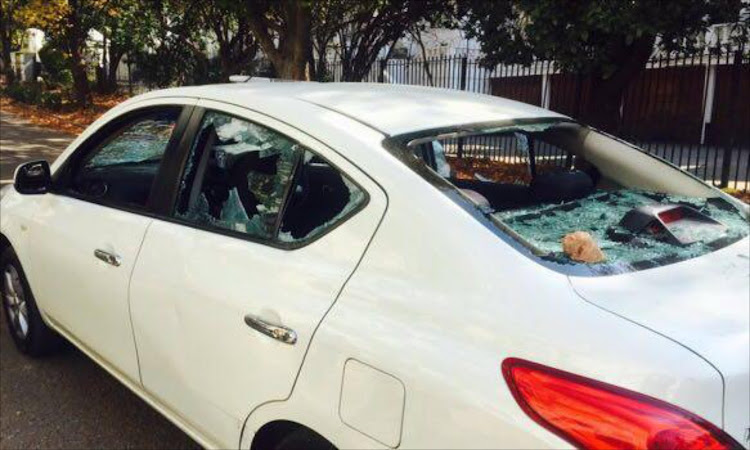 One of the vehicles damaged in the alleged altercation between Uber drivers and metered cab drivers outside the Gauteng Station in Sandton, Johannesburg on 20 May 2016.
Image: The Sandton Times

Lindelani Mashau's family had hope that he would pull through‚ even after he was horrifically injured when his car was set alight in Pretoria last month.

"It is hard for them because it seemed like he was starting to recover and now he is no more‚" a contact close to the family said.

The Uber driver was brutally attacked on 10 June in Sunnyside in the escalating violence and intimidation meted out to Uber drivers by traditional cab drivers.

Several Uber drivers who spoke to TimesLIVE on condition of anonymity have raised serious concerns with the taxi-hailing operator‚ particularly security and working conditions.

An Uber driver has died after he was attacked and set alight in his car in Pretoria last month.
News
3 years ago

"The security guards the company claims are there to protect us stand there and do nothing when we are attacked. They take forever to arrive on the scene and also act as spies for the company‚" a Johannesburg-based driver said.

He said last Friday a woman driver was attacked at Park Station in the presence of the guards.

He said the woman's vehicle was boxed in by metered taxi drivers and she had to drive into the vehicles to escape whilst the guards watched.

"The worst part is that we are also not supposed to defend ourselves or fight back or we are deactivated (suspended from the app-driven service). The guards are just there to rat us out if we defend ourselves‚" he said.

Another driver‚ a 33-year-old from Limpopo‚ said he was assaulted in Pretoria last month and the security guards did nothing.

He said the guards told him they were there to "calm the situation" and not to intervene.

"What's the point of having security guards that do nothing to protect us?" he asked.

The drivers said Uber was throwing them to the wolves and would not take responsibility for what was happening to them.

They told of how they have to risk their lives daily to pay their car instalments and to feed their families.

"My wife calls me every minute just to check if I am still alive. Getting out there is dangerous‚" the driver said.

He said late last month Uber raised its cut of drivers' taxi fares from 20% to 25% without notice.

"You complain‚ you get deactivated. Drivers are forced to work under these conditions because of fear of being deactivated‚" the driver said.

Uber South Africa is planning to meet with Police Minister Fikile Mbalula in an effort to strengthen police protection of Uber riders and drivers who ...
News
3 years ago

Zweli Ngwenya‚ spokesperson of The Movement‚ formed by drivers concerned with their safety‚ confirmed the issues raised by the drivers.

He said Uber was now challenging a ruling by the Commission for Conciliation‚ Mediation and Arbitration (CCMA)‚ which had ruled that seven deactivated drivers were Uber employees.

An email from Uber‚ addressed to drivers‚ confirms Ngwenya's statement.

The email‚ seen by TimesLIVE‚ reads: "As you may have heard‚ a CCMA ruling was issued yesterday finding an employment relationship (sic) between seven deactivated driver-partners and Uber South Africa. This change will only apply to these seven individuals‚ and there is a long legal challenge ahead before this ruling can be considered a win‚ or a loss for any side on this important issue."

Ngwenya said their biggest issue was security‚ given that drivers were hijacked‚ intimidated and beaten up on a daily basis.

"It is a risky business. There are lots of issues but people are scared of talking because of fear of being deactivated‚" he said.

Thugs use the system to lure drivers to deserted spots‚ where they are then hijacked‚ the drivers complained.

In its reply‚ Uber said last week's CCMA ruling "provides an important opportunity for all sides to carefully examine the role of independent contractors in an increasingly digital age‚ and specifically where small‚ midsize and large business owners rely on technology-enabled services to grow their independently operated companies". The company said it was looking forward to having the ruling reviewed before the Labour Court.

On the role of the security guards‚ Uber said it had hired additional security in areas where drivers and commuters have reported intimidation.

"They are not the authorities or police‚ they have been put in place to monitor and manage the situation as best as possible and to ensure reliable pickup and drops off. We will continue to provide additional security measures‚ however Uber is not a security company and we need Law Enforcement and the Police Minister to get involved and help solve the issue as soon as possible‚ as they are the only ones who can move this forward."

Uber further said it had zero tolerance for retaliation or violence and added that driver-partners could not be "deactivated on a whim". The company rejected reports that it had raised its cut from 20% to 25%.