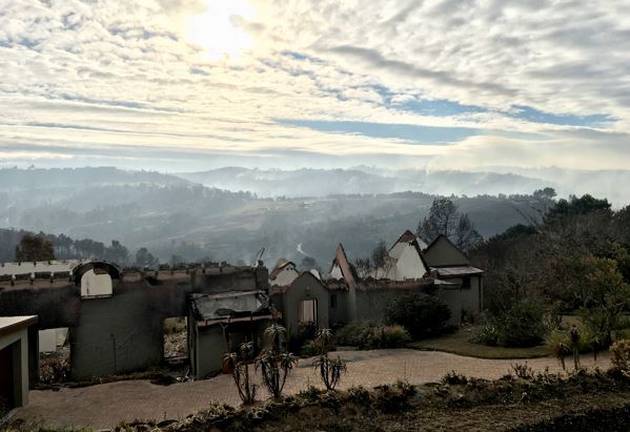 Homes in Knysna destroyed by the fire.
Image: Anthony Molyneaux

Cody the horse, who sustained serious burn wounds when fire caused havoc along the Garden Route, will survive.

The public came to his rescue by raising enough money to foot his medical bills.

Cody made headlines when he and other ponies went missing following the blaze. He was found three weeks later along the N2, severely burned and struggling to see.

The money will also be used to search for two other ponies, Mila and Deja Vu. It is believed that they suffered injuries as a result of the fires as well.

According to a message posted on the BackaBuddy fundraising website, euthanasia was initially the only option for Cody but his owner, Karen Rademeyer, refused.

"With intensive treatment and a great deal of TLC, his recovery to date has been remarkable," the post read.

It also explained that Cody's medical supplies had been donated while his vet costs were partially covered by the SA Veterinary Association's disaster relief funds set aside specifically for animal burn victims.

"Cody will probably also require surgery to lower his eyelids at a later stage," read the BackaBuddy post.

A concerned Noetzie conservancy resident has been working closely with Southern Cape Fire Protection Association, SANParks and community to attend to ...
News
4 years ago

Plettenberg Bay authorities are on high alert after fighting fresh fires that could flare up‚ with strong winds forecast for the Garden Route.
News
4 years ago

After the fires, the latest deadly threat facing people on the Garden Route is asbestos.
News
4 years ago

Aid organisation Gift of the Givers on Friday paid tribute to victims of the devastating Knysna fires‚ which ripped through large swathes of the ...
News
4 years ago