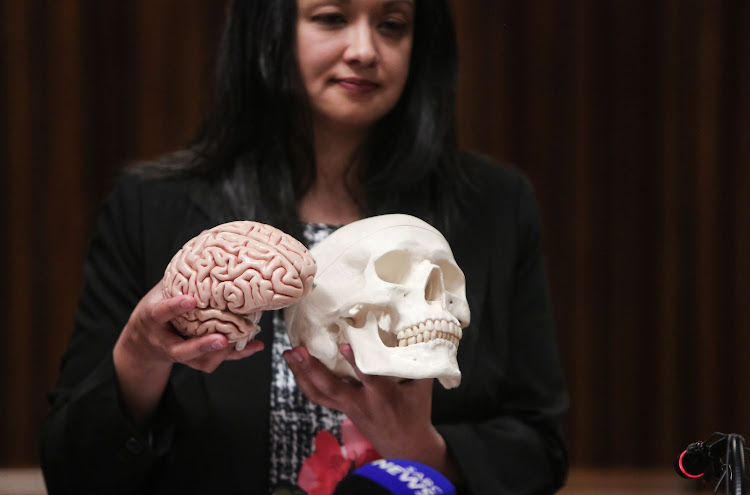 Forensic Pathologist Dr Shakeera Holland shows off a skull during the inquest into the death of Ahmed Timol at the North Gauteng High court in Pretoria. Holland's findings suggest that Timol had suffered serious injuries prior to the fall from the 10th floor of John Foster Square in Johannesburg on 1971.
Image: Alaister Russell/ The times

Forensic pathologists have concluded that activist Ahmed Timol’s death was not caused by the fall from the tenth floor of the 13-storey John Vorster Square building and that his death could be attributed to torture.

Pathologist Professor Steve Naidoo took the inquest held at the Pretoria high court on Wednesday through a total of 35 internal and external wounds documented on Timol’s autopsy report‚ pinpointing which ones could be attributed to the fall and those caused by torture.

He said wounds 8-35 in the autopsy report were not fall-related.

Naidoo said these were “individual‚ small‚ discreet and separate from each other”; which were hard to get in a fall‚ such as wounds under the armpit and sunken area of the neck under the jaw.

He said the depressed fracture of Timol's skull was as a result of a blow delivered with a heavy object‚ resulting in an “eggshell-like fracture”.

Naidoo said the severely injured Timol would not have been able to walk to the window‚ through which he was said to have jumped‚ unaided.

“…he would have hardly been in a position‚ if he was conscious that is‚ to be able to ambulate and walk to the window or get up from that chair‚ walk to the window and achieve to heave himself out. He would not have been able to walk unaided with an ankle and calf injury‚” he said.

Earlier in the day forensic pathologist Dr Shakeera Holland said Timol was so severely tortured that the blood vessels leading to his kidney were completely severed “as a result of a blunt force. So it was completely torn off so that the kidney was left free floating without any vascular attachment.”

She testified that there was extensive damage to Timol’s brain caused by the depressed skull fracture that could have been inflicted with a blunt object.

Holland said the depressed skull fracture with loose bone fragments was not consistent with the pattern of injuries which would likely be seen in a fall from a height and must be explained.

“Based on my years of experience as a forensic pathologist‚ bruises from a fall from a height tend to be more irregular and poorly defined whereas most of the bruises that can be seen in the photographs are well defined‚ patterned bruises and therefore no consistent with a fall from a height‚” she said.

A veteran ambulance and surgery expert has told the North Gauteng High Court in Pretoria it is surprising that police rushed to move anti-apartheid ...
News
5 years ago

She maintained that the multiple injuries on Timol’s body could not be ascribed to a fall from a height which indicated that Timol “sustained physical assault whilst in police custody prior to his death”.

Holland said her findings called into question the findings of the original inquest process that the manner of death was suicide‚ saying this finding must be challenged.

She said the fractured skull would have rendered Timol unconscious‚ which would make it impossible for him to move around and jump out of a window.

Holland said her assessment was that Timol was barely alive when he fell.

The inquest into activist Ahmed Timol’s death on Wednesday heard how his body was riddled with external and internal injuries consistent with severe ...
News
5 years ago

Tactics used by apartheid security forces‚ including a forged letter claiming to be from Desmond Tutu‚ have been laid bare during the inquest into ...
Sport
5 years ago

The ghost of room 1026: Inquest to shine light into death of Timol

The death of Ahmed Timol, who fell from a window at John Vorster Square, was an apartheid travesty. Now his family hope to set the record straight
Opinion & Analysis
5 years ago