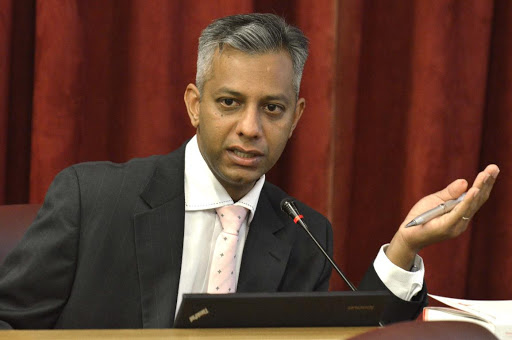 State-owned power utility Eskom has suspended its chief financial officer Anoj Singh on a precautionary basis‚ pending the outcome of a forensic investigation.

The suspension‚ The Times has learned‚ follows an urgent intervention by Finance Minister Malusi Gigaba and his counterpart at Public Enterprises Lynne Brown.

This comes after Eskom was faced with a threat from the Development Bank of South Africa to recall its R15-billion loan if no action is taken against Singh and other Eskom officials responsible for the beleaguered parastatal’s qualified audit opinion‚ The Times has learnt.

In releasing its financials last week‚ Eskom confirmed irregular expenditure to the tune of R3-billion‚ but downplayed any possible consequences from its lenders. However‚ The Times has learnt that DBSA’s threat‚ which was issued in a letter on Monday‚ was followed by another major bank the next day.

Such action would trigger similar recalls from Eskom’s other lenders‚ which exposes the fiscus to an immediate demand for more than R300 billion that Eskom owes a number of lenders.

Two weeks ago the Sunday Times reported that Eskom closed the 2017 financial year with R20 billion in its bank accounts.

“It’s a major sovereignty risk … It’s R350 billion because once DBSA happens‚ it triggers everyone else. If they all put out it means treasury must go and find hundreds of billions by tomorrow‚” said a government source today.

The Eskom board of directors confirmed in a statement on Thursday evening that it had "taken a decision to grant (Singh) special leave pending an investigation".

The board named Calib Cassim as Interim Chief Financial Officer‚ noting he is a registered chartered accountant‚ with 15 years of service at Eskom.

“We would also like to assure all stakeholders that the company is stable as evidenced by the recent financial results‚ and will continue delivering on its turnaround strategy‚” said Acting Chairman‚ Zethembe Khoza.

Although Gigaba’s office could not be immediately reached for comment‚ The Times understand he has held crisis meetings with DBSA on Monday and is currently allaying fears of other lenders.

A board member at the Development Bank of South Africa declined to comment‚ but did not deny a letter was addressed to the Eskom board on Monday‚ instead indicating that correspondence between it and Eskom was confidential.

The Times on Monday reported that Singh’s involvement in major deals involving the Gupta family could be traced through evidence in leaked emails.

Most notably‚ Singh was directly sent a Trillian Capital Partners invoice for R30.6-million on 11 February 2016‚ two months before the company was registered on Eskom’s supplier database.

Trillian‚ who announced on Wednesday it and key Gupta lieutenant Salim Essa had parted ways‚ sent the invoice again on 14 April – it was paid the same day‚ coincidentally‚ the day payment was due for the Gupta’s purchase of Optimum Coal.

Singh also travelled to Dubai five times between June 6 2014 and December 24 2015 where he stayed in the five-star Oberoi Hotel on each occasion‚ all on the Gupta’s tab.

Last week Eskom executives finally admitted‚ after months of public denials‚ it had paid Trillian a total of R495-million – without a contract being in place.

While the South African economy is facing challenges‚ capital expenditure spending by public sector institutions has been growing steadily‚ ...
News
4 years ago

Eskom denies it is ‘broke’

Responding to reports questioning its financial sustainability‚ the electricity provider said that due to limitations around disclosing financial ...
News
4 years ago

Broke Eskom to splash on bonuses for Molefe, Koko