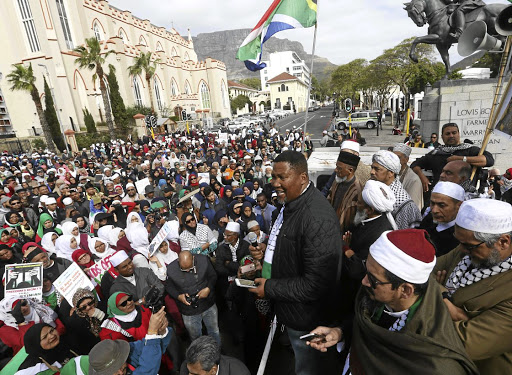 Nelson Mandela's grandson and MP Mandla Mandela has said the government should revoke visas for an Israeli delegation expected to visit South Africa next month.

Mandela flew to Cape Town yesterday to take part in a march during which thousands of Muslims and other protesters demanded South Africa cut all diplomatic ties with Israel and expel the ambassador.

More than 4000 members of the Muslim community and other dignitaries took to the streets of Cape Town to protest against the securitisation of the al-Aqsa mosque in Jerusalem.

The protesters marched from the Zinatul Islam mosque in District Six to parliament, where a memorandum addressed to the minister of international relations was handed over.

The Muslim Judicial Council of SA, which organised the march, wants the government to close the Israeli embassy immediately for what it called "continuous desecrations" on the Muslim holy site in Israel.

"Madiba would have wanted to see the continuation of the Mandela family pledging its support to Palestinian people," said Mandela.

He described the situation in Palestine as the "greatest disgrace of our time".

"We demand that all occupied land be returned [to Palestine]. Madiba reminded us that our freedom is incomplete until Palestine is free."

Mandela also wants the government to revoke visas for an Israeli delegation expected next month.

"We should send this delegation back to Israel packing. They are not welcome in our beloved South Africa."

Two security officers were gunned down at the al-Aqsa mosque by Israeli Arab gunmen on July 4. Israel then moved to secure the compound and installed metal detectors.

The move angered large sections of the international Muslim community and has led to ongoing violent clashes at the site.

"We want the world to know that al-Aqsa is not only sacred to Palestinians but to every Muslim, and that's why we are here."