R5.2-million spent on food and necessities for children and families in need 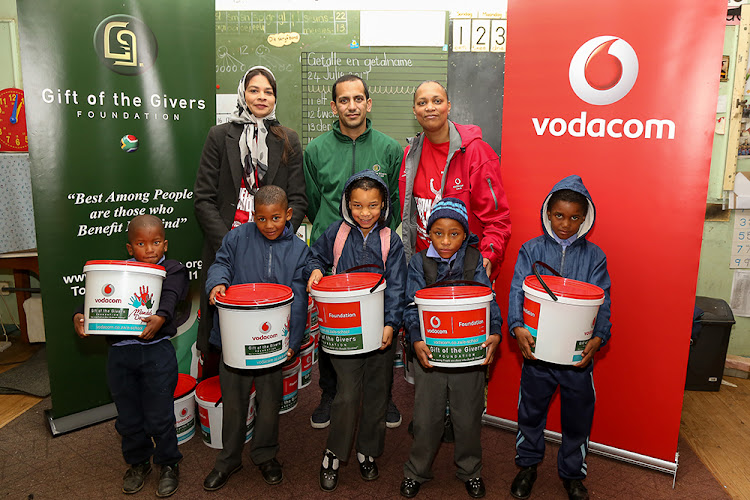 BRAND VOICE | Pupils at Seshegong Secondary and Bathabile Primary schools in Olievenhoutbosch, Centurion, were the surprise recipients of an act of kindness for Nelson Mandela International Day.

Ahead of Mandela Day on July 18, Vodacom employees along with volunteers from the Nelson Mandela Foundation, the Department of Basic Education, Gift of the Givers, Kaizer Chiefs Football Club, the Blue Bulls, Wheelchair Basketball SA and members of the media raced against the clock to pack as many as 50,000 food parcels. These parcels were distributed to selected schools across the country on the day.

This initiative formed part of a larger project facilitated by the Vodacom Foundation, building on its annual food security drive in honour of the annual Mandela Day, launched in 2013.

This year, R5.2-million was spent on providing nutritional food and necessities to children and families in need, distributed to previously disadvantaged schools.

As a long-standing partner of the Nelson Mandela Foundation, Vodacom’s annual response to Tata Madiba’s call is to pack and distribute food parcels to learners from these schools. This year, Vodacom employees and partners handed over 2,500 food parcels to Seshegong Secondary and Bathabile Primary schools in Olievenhoutbosch.

SPONSORED | R5.2-million has been spent on the packing and distribution of food parcels for Mandela Day this year
News
4 years ago

Melanie Forbes, managing executive for Vodacom consumer business in the Gauteng region, said: “This month, we recognise Tata Mandela’s outstanding contribution to the creation of a non-racial, non-sexist, democratic South Africa. We celebrate his example of dedication to the values that promote conflict resolution, improved race relations, human rights and gender equality.”

She added: “Vodacom, through the Vodacom Foundation, has partnered with Gift of the Givers to promote goals one and two [of the United Nations’ Sustainable Development Goals] – end poverty in all its forms everywhere; and end hunger, achieve food security and improved nutrition, and promote sustainable agriculture.

“This is one of the best and most befitting ways we can thank Tata for being an inspiration to the world.”

In the spirit of helping to promote social justice in South Africa, Vodacom has renewed its support of the global #ActionAgainstPoverty movement and committed a further R300-million to investment in education over the next five years.

Vodacom strives to make every day a Mandela Day through several programmes, the biggest of which is focused on education, in keeping with Mandela’s passionate belief that “education is the most powerful weapon which you can use to change the world”.

Forbes said it was in this context that Vodacom had invested more than R350-million in education in partnership with the Department of Basic Education since 2008, and would invest the additional R300-million in e-learning, information and communication technology training for teachers and youths, and school connectivity across the country.

– TimesLIVE in association with the Vodacom Foundation