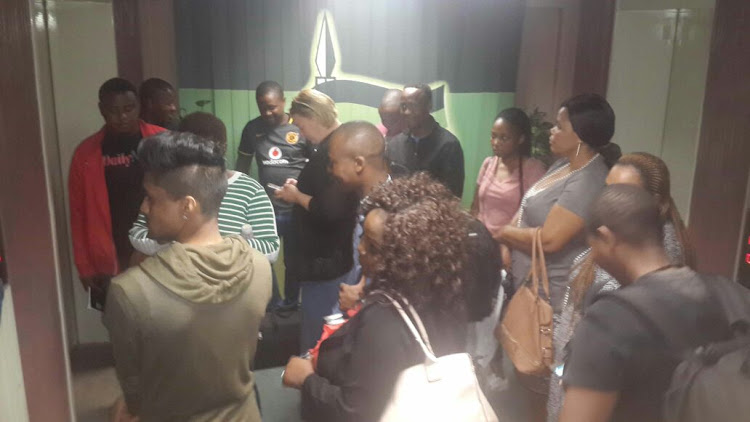 Journalists stand at the lift at the ANC's office in Durban as they walked out of a press conference that hadn't started an hour after its scheduled time.
Image: JONATHAN ERASMUS

In the true spirit of radicalism‚ a group of over 20 KwaZulu-Natal journalists - including a reporter and photographer from TimesLIVE - on Friday morning walked out of a regional ANC press briefing in Durban following an hour delay and with no proper explanation from party leadership.

The ANC's eThekwinI region convened an urgent press briefing "to deal with organisational issues"‚ telling reporters that it would start at 11am. It was called as reports of consternation within the leadership emerged‚ particularly over an massive exodus of senior management within the Durban city administration and it's ripple effects in the region.

However‚ the event did not start on time.

ANC regional spokeswoman Zinhle Cele earlier said there was "a little bit of delay" and that she was also organising refreshments. But the clock ticked by.

At 12pm‚ SABC News's Ayanda Mhlongo raised hell as frustration grew. Almost all reporters present at the ANC conference were also covering the EFF's fourth birthday celebrations‚ and said the delay meant they might miss the strict accreditation deadlines for Saturday's party. With no response from ANC leadership‚ reporters walked out.

Journalists leave the ANC press briefing on Friday morning after it hadn't started with an hour of its scheduled time 🎥@moskido pic.twitter.com/dx4A8H9bQ3

Cele followed reporters to the elevators to urge them to stay‚ but to no avail.

Cele was referring to a group of EFF supporters who were reportedly joining the ANC on the eve of their party's birthday.

ANC regional secretary Bheki Ntuli stood by the door startled at the walkout‚ but said nothing.

Journos at the lift of the ANC building after a walk out. 🎥@moskido pic.twitter.com/oOLW41k5ls

Jonathan Erasmus, Noseweek Magazine's assistant editor, who was at the press conference, said: "The ANC in KZN has, at least amongst journalists, built-up a reputation for being late. In my 13 years of being a journalist in this province, we sometimes wait for several hours beyond the scheduled time for press briefings to begin."

He said that by the time an hour had passed on Friday - "with no clear sign of the press briefing starting" - the journalists called it quits.

"It was great to see such unity among journalists across the various news platforms in print, radio, digital and television.  This is not the first time. In 2016 journalists walked out of a KZN ANCYL briefing that was running well-over an hour late. We respect the right of all political parties to host press briefings. We trust that they will also respect our need to cover multiple stories in one day," he said.