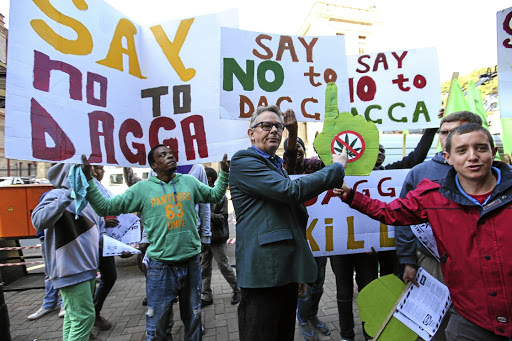 SPLIFFING GOOD FUN: Jules Stobbs stands next to members of the Concerned Young People of SA outside the Pretoria High Court yesterday. Stobbs and his partner Myrtle Clarke are mounting a legal challenge to cannabis smoking laws Picture: Alaister Russell

"Dagga couple" Jules Stobbs and Myrtle Clarke's attempt to have their court bid for the legalisation of dagga live-streamed hit a snag yesterday.

The state and Doctors for Life, a Christian doctors' group headquartered in the US who applied to be part of the case, told the court they were opposed to the broadcasting of the much-anticipated hearing.

Stobbs and Clarke are taking seven government departments to court. They asked the court two months ago to let the case be made available to any media house and live-streamed on their site Fields of Green For All.

The constitutional hearing will be heard in the Pretoria High Court for a month.

Permission to live-stream the case was granted on Friday with strict conditions, but the state and Doctors for Life opposed it yesterday.

Doctors for Life spokesman Johann Claassen said the plaintiffs would then also be the broadcaster, but they would not be as neutral as a media house would be.

The case could then set a precedent in which a murderer in a criminal case could live-stream his or her own trial and gain public support, he said.

Doctors for Life lawyer Helene Davidtsz said clips from the trial could be taken out of context and reused.

She said the pair did not fall under the Broadcasting Act as a media house applying to film a court cause would.

Stobbs acknowledged that a publicly available feed would allow anyone to take clips and use them out of context.

"That's what putting it in the public domain means."

The world's leading scientific experts on dagga and its effects of the body will on Monday square off against each other in the "trial of the plant" ...
News
5 years ago