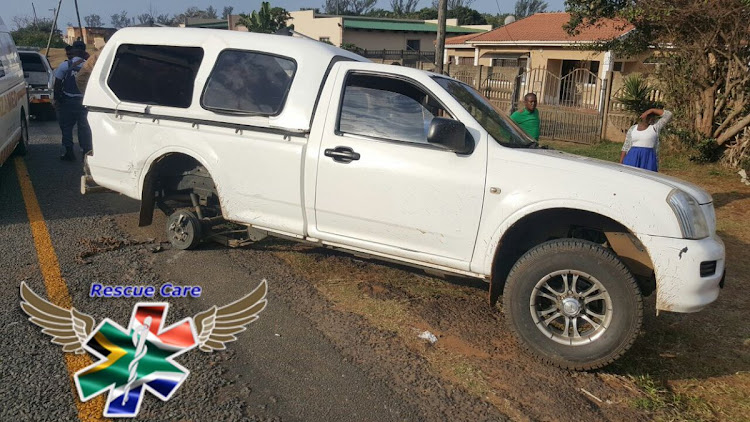 Eighteen people were injured when a Hyundai bakkie collided with another bakkie in KZN.
Image: RESCUE CARE

Eighteen people‚ including 12 school children‚ have suffered injuries after two bakkies collided on the KwaZulu-Natal south coast on Wednesday.

Last week 18 schoolchildren sustained minor injuries when their vehicle was involved in an accident near Mthatha in the Eastern Cape.

The pupils were in a Hyundai bakkie on their way to school when it collided with another bakkie on the road between Shell Ultra City and Walter Sisulu University’s Nelson Mandela Drive campus.

In a separate incident last month‚ a dozen pre-schoolers were injured in a crash involving a minibus taxi in Ntuzuma‚ north of Durban.

In January‚ five children were killed and several injured after a bus collided with a minibus taxi‚ also in the Ntuzuma area.

The children were being transported to school on the opening day of the first term.

The latest accident has brought the issue of scholar transport into sharp focus‚ with government enforcing a regulation in the National Road Traffic Act‚ which makes it illegal to use bakkies to transport school children.

18 children hurt in accident near Mthatha

Eighteen schoolchildren sustained minor injuries on Tuesday morning when their vehicle was involved in an accident near Mthatha in the Eastern Cape.
News
5 years ago

RTMC to probe cause of fatal accident in which MP died

The Road Traffic Management Corporation (RTMC) says its crash investigating team will work with other law enforcement authorities to investigate and ...
News
5 years ago

A large flatbed truck crashed through a thick stone wall and then down into an office car park below it in Fourways north of Johannesburg on Tuesday ...
News
5 years ago

Around 50 injured in Benoni pile-up in heavy mist

Around 50 people were injured after numerous vehicles crashed into each other on the N12 between Etwatwa and Putfontein Road turnoff in Benoni‚ ...
News
5 years ago

Lucky escape for patrons as car crashes into restaurant

Several people escaped injury on Saturday evening when a car crashed into a fence and restaurant on Long Street in Newlands‚ west of Johannesburg.
News
5 years ago