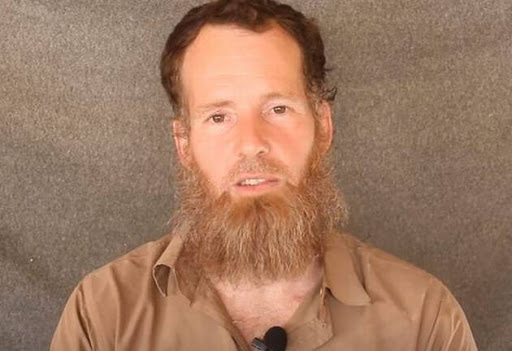 Stephen McGown.
Image: Gift of the Givers Foundation via YouTube

He was held in Mali for five-and-a-half years. Back in South Africa‚ his family was living the nightmare no one should face: Stephen McGown – son‚ husband‚ brother‚ cousin‚ nephew‚ tourist – had been captured by al-Qaeda.

They didn’t know if he would make it back dead or alive‚ or even at all. But now he is home.

Back in South Africa‚ his family was living the nightmare no one should face: Stephen McGown – son‚ husband‚ brother‚ cousin‚ nephew‚ tourist – had been captured by al-Qaeda.

They didn’t know if he would make it back dead or alive‚ or even at all. But now he is home.

His release was announced by foreign minister Maite Nkoana-Mashabane‚ and according to Stephen’s cousin‚ Dawn Daniels‚ it was the dogged persistence of the captive’s father‚ Malcolm‚ that finally paid off.

“Malcolm is a true hero in this story. Nobody could ever wish for a better father‚” said Daniels.

“He called people‚ sent emails‚ planned‚ pushed … he was absolutely relentless. Stephen is home because of his dad’s hard work.”

“It was a big surprise when I saw Stephen walk through the door. When I hugged him‚ he felt as strong as ever‚” Malcolm McGown said at a news conference in Pretoria where the announcement was made.

He thanked South Africans of “every race and creed” for their support over the last few years‚ adding: “I wouldn't ever wish this to happen to anyone else.”

Stephen‚ now 42‚ was riding his motorcycle down the continent early in 2012 when he was captured. It was going to be his last adventure before settling down with his wife‚ Catherine‚ starting a family and going to work with his father.

One Tuesday night‚ Stephen contacted the family via Skype and they had a long conversation. “He told us about the people he had met and said they were going to Timbuktu to see the ancient manuscripts‚” said Malcolm. Early the next Saturday they got the news that would change their lives and throw all plans for the future into turmoil: Stephen had been captured by al-Qaeda in a restaurant in Timbuktu with two other travellers‚ one Dutch and one Swedish.

A fourth man‚ a German‚ who refused to get onto the truck without his medication‚ was killed on the spot.

The Dutch hostage’s wife hid under the table and was spared. As soon as she got to safety‚ she broke the news so the families could be told.

“I frantically called Steve’s phone so many times. I left a message saying ‘Steve‚ just do what they want you to do’‚ but his phone had long since been confiscated‚” said Malcolm.

Al-Qaeda’s North African affiliate‚ al-Qaeda in the Islamic Maghreb (AQIM)‚ claimed responsibility for the kidnappings of the three men.

Not long after this‚ Stephen’s mother‚ Beverley‚ was told she needed to be on oxygen for chronic obstructive pulmonary disease. She was also debilitated by extreme panic attacks and couldn’t be left alone.

In March 2015‚ fellow hostage Sjaak Rijke‚ from Holland‚ was rescued by French forces. He and Stephen had been kept together for the first few years but had then been separated.

“He came to South Africa to meet us and tell us about Steve‚” said McGown‚ “As I showed him around the house‚ he said‚ ‘I know every single room and inch of this house. Steve and I spent endless hours reconstructing miniature versions of our homes and showing them to each other’. I think they made them out of sand and bits of cardboard.”

The last verifiable “proof of life” the McGowns received was in December 2015‚ when Gift of the Givers negotiated with the captors to release a video.

“Not a single day went by that we didn’t talk about our son and how to get him back‚” said Malcolm.

Sadly for Bev‚ her son’s release came too late. She died early last month after an illness that her husband described as a “rollercoaster”‚ saying she had held on so tight to see her son again but “just couldn’t cling to life any more”.

The couple spent five-and-a-half years trying to get their son home. Now that has happened‚ the real journey of reconstructing family life begins.

The father of Stephen McGowan‚ who had been held hostage by Islamist militants in Mali since 2011‚ says his son is looking “well and healthy”.
News
4 years ago