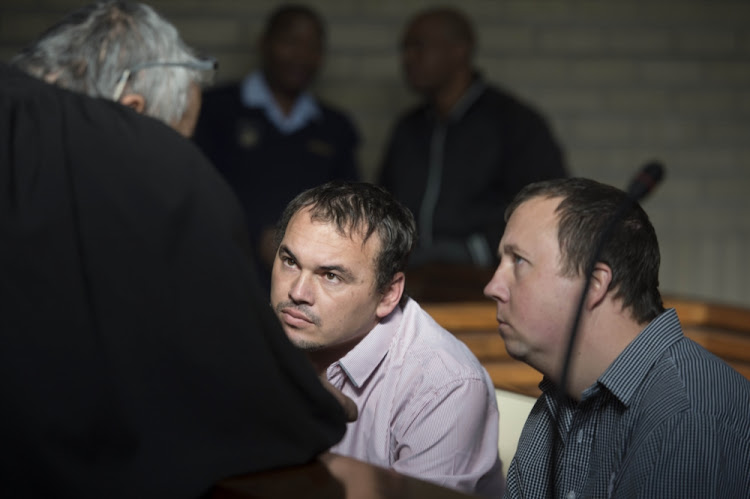 Theo Jackson and Willem Oosthuizen during their appearance at the Middelburg Magistrate’s Court for charges of assault and attempted murder of Victor Mlotshwa on June 26, 2017. File photo.
Image: Gallo Images / Beeld / Deaan Vivier

The man who was allegedly attacked by two farm workers‚ placed in a coffin and threatened that he would be doused with petrol‚ on Thursday painted a grim picture of life for black people living near the farms in JM De Beer Boerdery next to Komati Power Station in Mpumalanga.

“Where we stay as black people we are being victimised by the white people who own the farms‚” Victor Mlotshwa told the High Court sitting in Middelburg. “These things are always reported to the police but nothing is ever done. What puzzles me the most‚ the vehicles [that some of the farmers drive] have emblems similar to the ones used by police. For me‚ this suggested that the accused worked with the police‚” Mlotshwa told the court.

Some of those in the court gallery murmured in agreement.

Mlotshwa was explaining to the court why it had taken him two months to lay a charge against two farmworkers who had attacked him.

Coffin assault victim describes how he pleaded for his life

The High Court sitting in Middelburg was on Thursday expected to hear even more emotional testimony from Victor Mlotshwa‚ alleged to have been ...
News
5 years ago

He claimed after he had fled from them‚ he had heard them commenting that he could run but even the police would not believe him. He only came forward after a video of the incident‚ taken by the accused‚ went viral. He read a newspaper article which detailed what was in the video and the victim‚ who at the time was unknown‚ was asked to come forward to the police.

The court has since learnt that besides the video‚ the two‚ Willem Oosthuizen and Theo Jackson‚ had also taken pictures of Mlotshwa on the day of the assault.

In one of the pictures‚ he is shown lifting up his t-shirt.

Mlotshwa could not recall when the picture was taken or who had taken it but under cross examination by Wayne Gibbs for Oosthuizen‚ he conceded that it was captured on the same day of the attack as it was in the same spot where the coffin had been placed.

Gibbs however‚ questioned why there were no visible injuries on Mlotshwa’s face or body when the picture was taken‚ despite him alleging that he was punched and kicked by the accused.

A second video of the so-called “coffin assault” has emerged and was played before the High Court sitting in Middelburg‚ Mpumalanga‚ on Thursday.
News
5 years ago

Mlotshwa could not explain but said when he managed to stumble out of the coffin and run‚ he was badly injured and his face had been covered in dust. He claimed he would not have waited for the two accused to take his picture after they had injured him. He had injuries to his ribs‚ his legs and arms but when he went to the doctor with the police several weeks after the incident‚ his wounds had already healed.

Several scars however‚ were still visible on his body‚ he said.

But Gibbs dismissed his version.

“The accused say they never beat you or kicked you. They did put you in the coffin and step on the lid and forced your hands into the coffin so that they would not hurt you. Your version is unlikely that you were hitchhiking‚ they chased you and started assaulting you without you saying a word‚” Gibbs said. “They will testify that when they said they would take you to the police because you have stolen copper cables‚ you threatened to kill their wives and kids and to burn their crops every year‚” Gibbs said.

Some of the people in the court gallery burst out in laughter‚ dismissing Gibbs’ version.

“I know nothing about this‚” Mlotshwa said.

'They beat me and forced me into a coffin'

Mother of coffin assault victim cries out in court

The man who was alleged to have been assaulted by two farm workers said he had asked his attackers why they were attacking him.
News
5 years ago

It could have been me‚ says witness in coffin assault case

A man who claimed to have been assaulted by the same farm workers accused of assaulting Victor Mlotshwa and putting him in a coffin said he feared ...
News
5 years ago