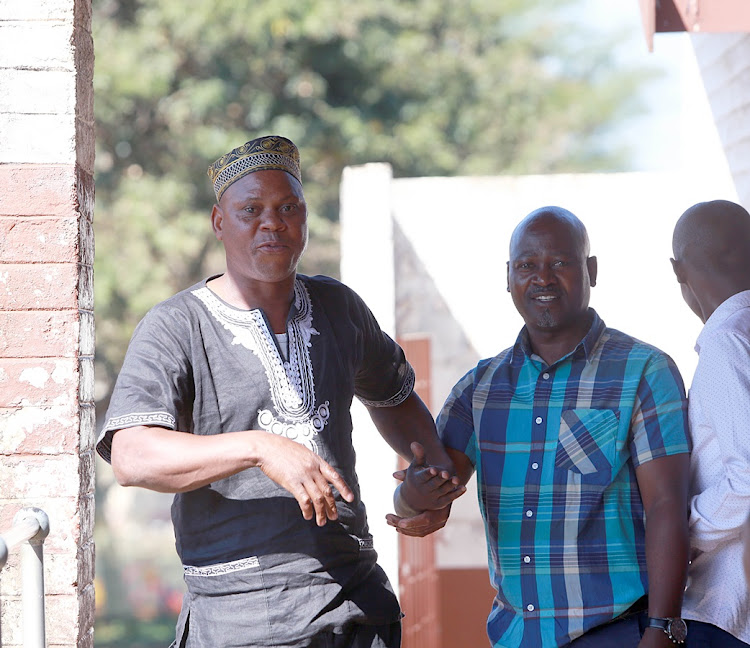 Alleged poaching 'kingpin', Dumisani Gwala, confronts a TimesLIVE photographer after appearing in the Ngwelezane Magistrates Court in Zululand on Friday. With him is co-accused Aubrey Dlamini.
Image: THULI DLAMINI

For the 15th time in less than two years‚ the trial against alleged poaching syndicate boss Dumisani Gwala was postponed in the Ngwelezane Magistrate’s Court on Friday morning.

The case had previously come before the court on 14 occasions since January 2016 and had been remanded usually because of problems with the legal representatives of Gwala‚ or of his two co-accused - Wiseman Makeba and Aubrey Dlamini. Friday's appearance was no different.

Mpume Linda‚ who is representing Gwala and Makeba‚ told the court that while she was ready to proceed with regard to Gwala‚ Makeba had run out of money and was no longer able to pay her fees‚ which meant she was withdrawing from the case.

Dlamini's legal representative‚ identified only as advocate Ngcobo‚ said he had to withdraw because he got a job at a local municipality and was no longer able to take the case.

Pressure is building on the National Prosecuting Authority to take the case of alleged rhino poaching kingpin Dumisani Gwala out of the magistrate's ...
News
3 years ago

The three men face a combined 10 charges‚ most relating to the illegal purchase and possession of rhino horn‚ and of resisting arrest. They were arrested in December 2015 after a sting operation in which rhino horn was bought.

In the processes‚ Gwala is alleged to have reversed a car over an undercover cop before he was shot in the leg and taken into custody. The case was moved between two other magistrate's courts‚ Ingwavuma and Mtubatuba‚ amid allegations of corruption.

State prosecutor Yuri Gangai said the ongoing postponements were frustrating. "This matter has a history of attorneys being replaced or withdrawn as it is approaching time for a trial date to be set."

The case was remanded to August 31 and Makeba and Dlamini have been instructed to get new legal representation.

The Gwala case has been mired in controversy‚ and activists have called for it to be moved to a different court. While this was briefly discussed‚ the issues with legal representation took priority. It is likely that this will be one of the points of discussion at the next hearing.

More than two years after his arrest, Gwala is yet to go on trial
News
3 years ago
Next Article