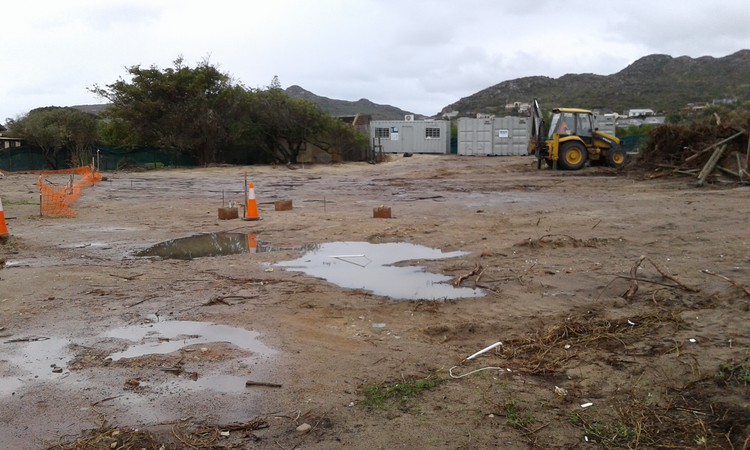 This is the site where the new fire station is being built in Masiphumelele.
Image: Supplied

Following the devastating fire which left 4‚000 Masiphumelele residents homeless in 2015‚ the City of Cape Town promised to build a fire station in the area. It was expected to be completed by the end of this year.

At the time the promise was made‚ community leaders welcomed the idea. Now they say they were unaware that the fire station would be built on land earmarked for gap housing‚ which usually caters for those earning more than R3‚500 and less than R15‚000 per month.

The nearest fire station is in Fish Hoek‚ some 5.7km away. According to ward councillor Felicity Purchase the new fire station will improve the response time to fires by at least five minutes.

In response to the claim that the land had been earmarked for gap housing‚ the City said‚ “if [the fire station] goes ahead‚ it would not take up the whole site.”

A fire at the Masiphumelele informal settlement has destroyed 150 structures leaving 600 people displaced, the City of Cape Town Fire and Rescue ...
News
6 years ago

Smith said the grounds have already been cleared and that there was not land elsewhere in Masiphumelele where the fire station could be built. The contract is valued at just over R14.1 million excluding VAT‚ he said.

Brett Herron‚ Mayoral Committee Member for Transport and Urban Development‚ said plans for new and additional housing for Masiphumelele residents had not yet been finalised.

“In the meantime we are also investigating the acquisition of other erven and making other land available in and around Masiphumelele for residential development to alleviate the housing need‚” said Herron.

Community leader Tshepo Moletsana said they have submitted objections to the City because “there was no agreement with the community that the fire station will be built on that land”.

More than a month after a fire killed two people and left 4000 homeless in Masiphumelele, near Fish Hoek, about 200 people are still living in the ...
News
6 years ago

Another community leader Dumisani Nhlapo told GroundUp that even if the fire station was built closer they would still have difficulty accessing the informal settlement.

“The informal settlement has no roads‚ the area is not reblocked. This is why we say houses first‚ so that people who can afford gap housing can move‚” said Nhlapo.

Smith said the fire station in Fish Hoek was meant to serve only that community when the population was much smaller.

He said a study by the Council for Scientific and Industrial Research (CSIR) revealed a lack of coverage for the Ocean View and Kommetjie areas due to the expansion of these areas.

“The new station will be equipped to stabilise walk-in medical/trauma and antenatal cases. It will also be equipped with intermediate or advanced life support staff to respond to Ocean View and Masiphumelele‚” he said.

This article was published by GroundUp

Families who lost their homes when 1 123 structures burnt to the ground in Masiphumelele on Sunday morning have started to rebuild their homes and ...
News
6 years ago

The City of Cape Town is doing everything in its power to ensure that the debris left behind by a blaze which claimed the lives of two people and ...
News
6 years ago