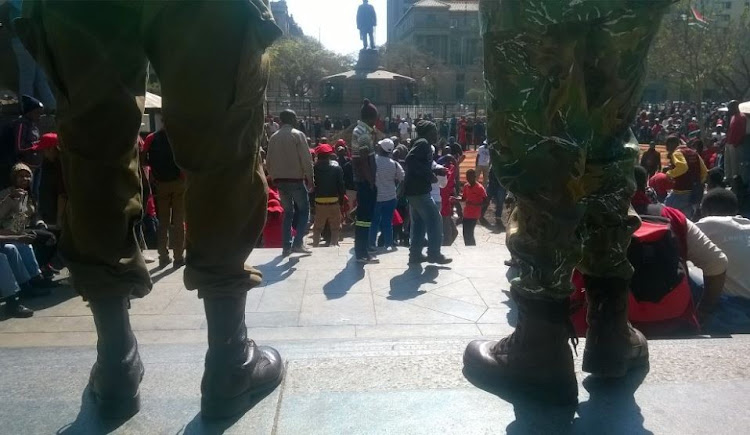 EFF marshals maintaining discipline at Church Square, Pretoria, ahead of the vote of no confidence in President Jacob Zuma.
Image: Sipho Mabena

Townships across Pretoria were tense this morning ahead of a vote on President Jacob Zuma's leadership in parliament.

Streets in the capital were barricaded with burning tyres.

The National Intervention and Public Order Policing Units were placed on standby as word spread that earlier protests - which were quickly ended by police - would erupt if Zuma was not voted out.

Members of parliament are due to debate a motion of no confidence at 2pm on Tuesday‚ after which they are expected to vote on whether or not Zuma should stay in power.

Although Mamelodi's streets were quickly cleared by police this morning‚ residents could be seen collecting rocks and stockpiling tyres.

Controversial Durban mayor Zandile Gumede has described those supporting a vote of no confidence against President Jacob Zuma as people ruled by the ...
Politics
4 years ago

Children were sent to collect petrol from several nearby garages.

Gideon Dube‚ a Mamelodi resident‚ said he was concerned over what would happen if the vote did not go the way people were hoping.

"The trouble this morning was mild. The people were allowing taxis and buses through‚ especially those carrying EFF supporters to the city centre‚ but I am worried about what is going to happen if the big man [Zuma] is not voted out.

"We are hearing that there will be big trouble. I just hope that the police are ready for this because I don't think that they will be able to stop it."

TimesLIVE saw people carrying 2-litre cooldrink bottles with petrol. They refused to speak to journalists and called older youth‚ who told reporters to leave the area.

"This is not your fight. This is ours. This is our time to speak. You have yours in the elections‚" said a teenager.

Secret vote: The magic number is 201

The magic number opponents of President Jacob Zuma are looking for in Tuesday's vote of no confidence motion is 201 votes.
Politics
4 years ago

Samuel Msimango‚ who lives in Mamelodi's Mahube Valley‚ said the problem was that it was not just Zuma who people were angry with.

"People are not only protesting for Zuma to leave‚ or stay. There are also people here who are going to protest over the lack of electricity and water."

He said for weeks people had been protesting over the lack of services.

"Residents from here have been fighting - from people who have proper houses in Mamelodi West‚ with water‚ electricity and toilets. They have been destroying their services because they don't have.

"There is a lot of anger here and it's all going to come out today."

A Mamelodi police officer‚ asking not to be named‚ said they were all on standby and that leave had been cancelled.

"Everyone has been placed on high alert."

Your 14-point guide to surviving the #ZumaVote

Members of the National Assembly will for the first time cast a vote by secret ballot on a motion of no confidence against President Jacob Zuma, ...
Opinion & Analysis
4 years ago

A Pretoria K9 unit member said that they were conducting "round-the-clock patrols" in the city‚ especially in the hot spots such as Mamelodi and Soshanguve.

"We have deployed to all off-ramps‚ major routes into and out of the townships. We are ready and if needs be we will be able to call on more manpower."

"It took us about two hours to clear the blocked roads in several areas. We have deployed all our forces and are in control of the situation."