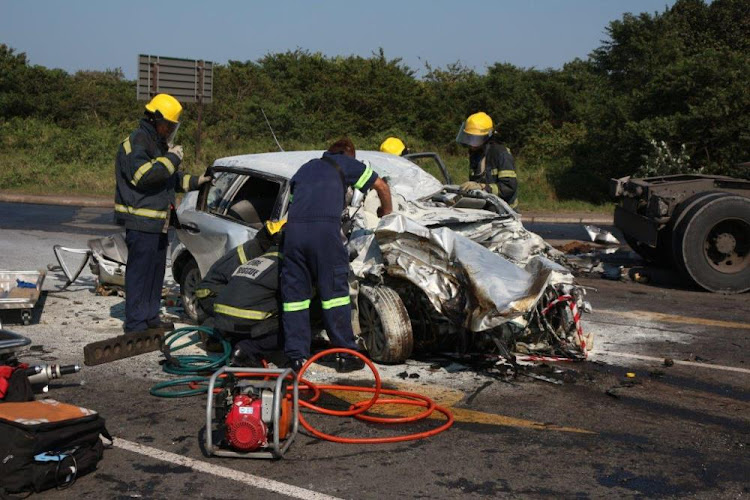 Fire fighters work to extricate the occupants of a car involved in a deadly crash with a truck on the John Ross Highway in Richards Bay on Women's Day.
Image: Dave Savides/Zululand Observer

At least six people have died in Empangeni and Richards Bay in northern KwaZulu-Natal in two separate crashes on Wednesday that left a further 14 people injured.

A crash involving a truck and a small car on the John Ross Highway in Richards Bay resulted in three people sustaining injuries‚ one of them seriously‚ while three others were declared dead on the scene.

The car caught fire after colliding with a truck.

The Zululand Observer newspaper reported the car was travelling towards Empangeni and the truck was making a right turn heading to the port of Richards Bay.

uMhlathuze Fire and Rescue members worked for more than an hour to free the occupants of the car‚ which collided with the side of the truck.

Later on Wednesday afternoon‚ a taxi lost control in central Empangeni‚ smashing through a brick wall on the property of the Zululand Remedial School.

According to paramedics‚ three people were declared dead on the scene while 11 others received treatment for serious injuries.

Could illegal mining be the cause of Bedfordview bridge collapse?

The SA National Roads Agency on Wednesday said it was probing what could have caused the collapse of a disused pedestrian bridge on the N3 near ...
News
4 years ago

Teams of demolition experts have descended on the N3 freeway in Johannesburg to dismantle a bridge that collapsed after being hit by a truck.
News
4 years ago

The N3 freeway in Johannesburg is likely to be closed for at least all of Wednesday, seemingly after a truck crashed into a pedestrian bridge, ...
News
4 years ago