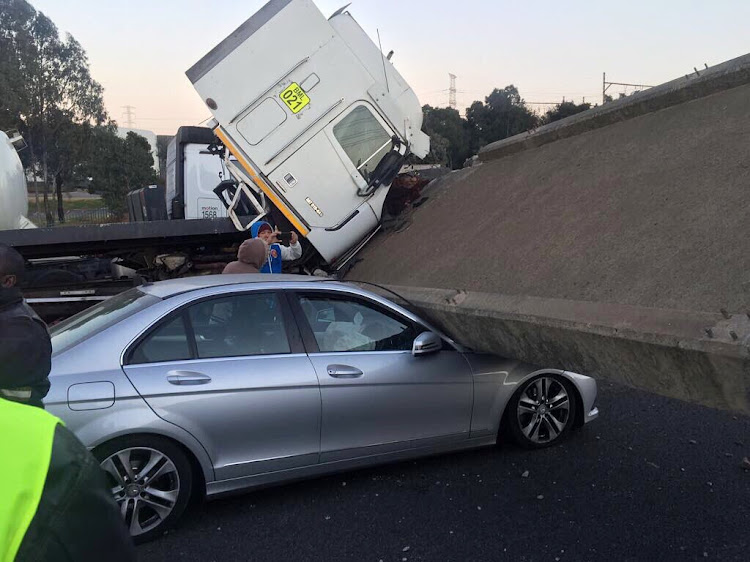 Five were injured when a bridge collapse on the N3 in Germiston.
Image: @SANRAL_za / Twitter

One of the people critically injured when a pedestrian bridge on N3 Geldenhuys Interchange collapsed is in a medically induced coma.

She was in a car with her husband and their daughter‚ 17‚ when the bridge between the Geldenhuys and Gillooly’s interchange came down around 01:00. She suffered facial and head lacerations‚ fractured ribs‚ injured her left knee and left femoral artery.

Vadi also visited the woman’s husband who is currently unaware of her condition.

Transport minister Joe Maswanganyi on Thursday morning visited the site of the N3 bridge collapse‚ just hours after the road was opened well ahead of ...
Politics
4 years ago

Vadi said he had sustained head injuries but was in a stable condition‚ alert‚ responding and should be discharged on Friday.

Two of the five people who were injured when the bridge collapsed have been discharged from hospital.

Maswanganyi‚ Vadi and Sanral CEO Skhumbuzo Macozoma visited the site of the collapse in Germiston earlier on Thursday.

Traffic authorities were braced for two days of chaos following the N3 bridge collapse in Gauteng - but demolition and clean-up teams worked through ...
News
4 years ago

Three trucks and one car were damaged when the bridge collapsed‚ blocking the N3 highway.

Sanral spokesperson Vusi Mona said on Wednesday they that there had been reports of an earth tremor in the area around the time of the incident.

Macozoma said: “There is a suspicion that there may have been a tremor this side and possibly that might have caused the bridge to be unstable. We don't know.”