Police have confirmed that three men killed during a shootout on Durban's M13 highway on Monday afternoon were among a gang who robbed security guards of cash at a petrol station earlier.

Colonel Thembeka Mbhele said the security guards were at a Hillcrest service station‚ west of Durban‚ when they were accosted by four armed men who robbed them of an undisclosed amount of cash before fleeing the scene in a blue VW Golf. 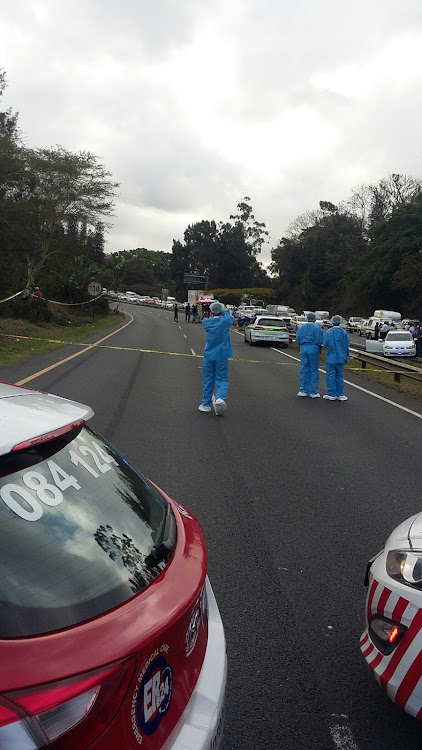 She said police were alerted and the vehicle with four occupants was spotted driving along the M13 highway.

"Additional police officers were called in as backup and the thugs were cornered. The suspects opened fire at police and police officers retaliated‚ fatally wounding three suspects. The fourth man was seriously wounded during the shootout."

Mbhele said the injured man is under police guard in hospital.

"Fortunately none of our police officers were injured during the shootout. Police seized four 9mm pistols and boxes of cash from the suspects’ getaway vehicle. The suspect will be charged for armed robbery‚ attempted murder‚ possession of unlicensed firearms and ammunition. He will appear in the Pinetown Magistrates’ Court soon.

“The suspects firearms will be subjected to ballistic testing to ascertain if they were used in the commission of any other crimes in the country."

The KwaZulu-Natal Acting Provincial Commissioner‚ Major-General Bheki Langa‚ praised police for responding swiftly to the robbery and preventing the suspects from fleeing with the stolen cash.

“I am glad that our police officers escaped the shooting unscathed and still managed to recover these illegal firearms and cash. These ruthless criminals have no respect for our laws or the people of this province. They are motivated by greed and have no regard for the lives that they ruin in the process‚” he said.