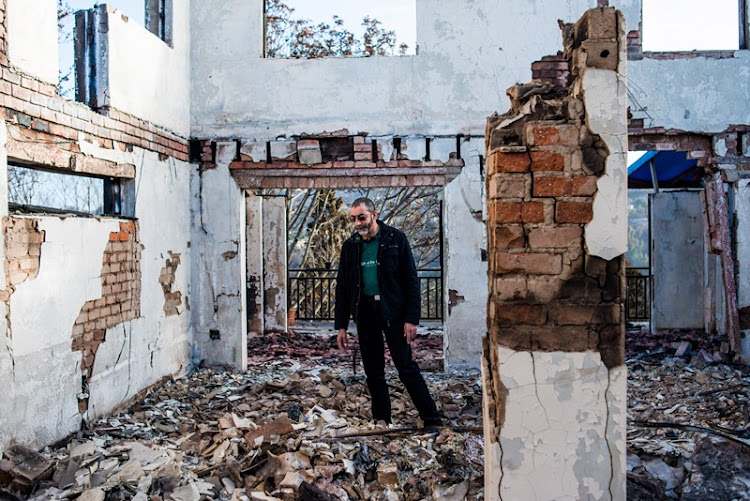 It started out as a special morning for Matty and Kyle Smith from Knysna in the Western Cape.

A celebratory dinner was planned but by the end of their evening instead of having a good time they were homeless.

“At 5.30am there was already a smell of smoke in the air. Walking around outside I knew the fire had to be to the north west of us but it was still too dark to see the smoke trail clearly.

“Eating breakfast I casually made a passing remark to my wife that I would not want to be out fighting fires today. Not with that wind. How flippant that remark now seems. It was only on my way to work that I realised that there was another large fire to the east of Knysna‚” said Kyle.

Kyle recalls how‚ as the fire closed in on them‚ he hurriedly grabbed frivolous items instead of necessities.

It is highly likely that a person started the fire that devastated Knysna in June‚ says the Garden Route town’s fire chief.
News
5 years ago

“It may seem strange to those who have not experienced such a situation‚ but‚ when it came to packing‚ we just didn’t know what to take. You look around and you simply don’t know where to start.

“We ended up taking some very weird things and leaving others behind. I took running socks with holes in them but left behind long pants. We took sleeping bags but left all our other hiking gear.

“I remember looking at all our photographs on the walls and thinking 'I don’t know how to choose' so left them all‚'' said Kyle.

"My baby and childhood books and toys that I had cherished‚ treasured and looked after for my child were all left behind. One external hard drive made it into a bag but the laptop and three other hard drives with photos on them did not.”

Two months later the family of three is still struggling to come to grips with having to start from scratch.

“I have been on maternity leave this entire time‚ so my leave has been absolutely crazy. We are still taking it day by day. Even two months later‚ it is crazy” said Matty.

Matty said they were underinsured at the time. Therefore it would cost more to rebuild their home. But moving to a new house‚ which would be cheaper‚ is something they are finding difficult to do. Kyle and his father built the house they had been living in for four years themselves.

A handwritten note tucked away in the pocket of a donated jacket restored hope to Knysna fire victim Quentin Haman at a low point in his life.Haman, ...
News
5 years ago

“Every now and again you get that feeling‚ you just want to go home‚ but you can’t. You just want to go back home and not deal with the insurance and having to clean the plot. It all adds to drama in our lives which we normally would not have had‚” she said.

Matty and Kyle are not alone: many have had to rebuild their lives slowly but surely. Losing her home has been particularly difficult for Vida Marais who is six months pregnant.

“For my previous daughter‚ I already prepared the nursery this time. Now it’s like I can’t do anything because we are moving from one place to the next. It is bittersweet because I have kind of lost some of the excitement” said Marais.

The stress of rebuilding has led Marais to reconsider whether she still wants to live in Knysna as rent prices have skyrocketed.

“There is nothing left for the lower middle class to rent. The people who don’t have insurance‚ they don’t have a place to go. People are charging R10‚000 for a two-bedroom [home]. The owners of these homes are the ones who are taking advantage of a lot of people. People can’t afford to live in Knysna anymore it has become too expensive.”

In addition Marais said that some people staying in popular tourist establishments have been asked to vacate before the start of the holiday season.

Danni Alberts said rent has gone up so much that it has become too expensive to continue living in Knysna.

A concerned Noetzie conservancy resident has been working closely with Southern Cape Fire Protection Association, SANParks and community to attend to ...
News
5 years ago

“A lot of people have sought alternative accommodation but you get others who are taking advantage of the situation. It is quite scary. Before you would be able to rent a three-bedroom [place] for R8‚500 now you won’t find anything less than R13‚000. We are in a situation where we have to possibly move away from Knysna‚ which is heart-breaking because my kids were all raised here‚” said Alberts.

However‚ Alberts has been a beacon of hope to many as she started a website and voucher programme for those in need. Donors can read a family's story on the website and buy a voucher to help.

The fire has destroyed many tourist establishments‚ 25‚000 jobs were affected‚ seven people died and 846 homes were burnt down in Knysna alone.