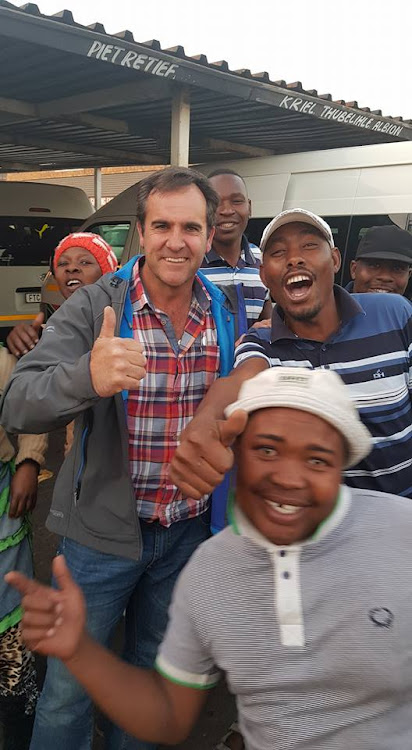 A taxi rank that does not tolerate crime.
Image: Facebook/Kosie van der Merwe

A thief was struck by “instant karma” after he stole a cellphone and taxi drivers took justice into their own hands.

Kosie van der Merwe‚ a farmer from Kinross in Mpumalanga‚ was driving to the Witbank Airport on Thursday around 5pm‚ with the window of his red Toyota Hilux bakkie open.

At a traffic light in Emalahleni a man asked Van der Merwe for a cigarette with his body slightly turned and his right hand in his pocket. Van der Merwe said he does not smoke.

The thief pulled out an Okapi knife‚ raised it above his shoulder “like he was throwing a ball” and demanded Van der Merwe’s Samsung S8.

Van der Merwe gave him the phone and the thief dashed across an open field. He chased the bandit in his bakkie‚ but braked when he crossed the road and escaped into a taxi rank.

“What are the chances for me as a white man to run into a taxi rank? You are just going to look for trouble‚ because the people inside the taxi rank do not necessarily know what happened outside.”

Kosie drove to the airport‚ where he was supposed to write an exam for his pilot’s licence. At the airport he phoned his family and informed them of the robbery.

“He (Van der Merwe’s father) said someone had just phoned‚ but at this stage it was still confusing‚ but he heard my phone is at the taxi rank.”

Van der Merwe thought it was a trap and drove to the police station. He had stopped to ask for directions when a car drove up to him.

Three people have been arrested in separate incidents at Johannesburg’s OR Tambo International Airport for dealing in drugs.
News
4 years ago

“Are you looking for your phone?” one of the men asked.

One of them jumped into Van der Merwe’s bakkie and they drove to the taxi rank. Kosie called his phone on the way to confirm its location.

“When we got to the taxi rank‚ they cheered and whistled as if I did something.”

One of the people at the taxi rank showed Van der Merwe his cellphone and the Okapi knife that had been used to threaten him.

They took photographs together before Van der Merwe walked to an ATM and withdrew R400 as a reward.

Kosie said people often have a preconceived idea that taxis just want to push other cars off the road. “This just proved the opposite.”

Officials have confirmed to TshisaLIVE that a man is being held in police custody for allegedly being involved in the murder of Dumi Masilela, as ...
TshisaLIVE
4 years ago

Mike Mpila‚ who helped the farmer‚ said taxi drivers often take matters into their own hands against “tsotsis” by beating them or handing them over to the police.

Van der Merwe shared the incident on Facebook and the post has gone viral. On Monday morning around 5‚000 people had shared the post and it had attracted around 1‚400 comments.

“To cut a long story short‚ the taxi drivers caught him and there was 'instant karma'. The taxi guys called the last dialled number on my phone to let my wife know that I should come to the taxi rank‚” Van der Merwe said.

“They really are not that bad and exceeded all my expectations. It gives you hope and shows that they are just as fed up with crime.”