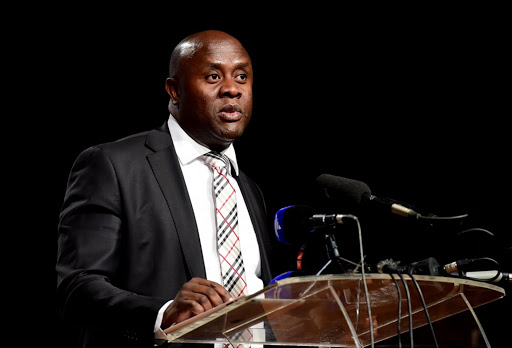 Concerns about the involvement of former SABC chief financial officer James Aguma in the awarding of a lucrative TV licence debt-collection contract have been raised by the High Court in Johannesburg.

The court‚ without giving reasons for its order‚ last month set aside a contract that the broadcaster signed with Lornavision in 2015. Lornavision is owned by Kuben Moodley‚ a former special advisor to Mineral Resources Minister Mosebenzi Zwane.

Now‚ in a judgment setting out reasons for that order‚ Acting Judge Sydwell Shangisa said the head of the SABC’s audience services division Sylvia Tladi was not party to the signing of the Lornavision contract and its subsequent management. Moodley and Aguma were among the signatories to the agreement.

The SABC is to withhold the pensions of its former COO‚ Hlaudi Motsoeneng‚ and CFO‚ James Aguma‚ in a bid to recover irregular benefits enjoyed ...
Politics
4 years ago

The audience services division deals with the collection of TV licences.

Tladi stated in an affidavit that she had reservations about the process followed in the appointment of Lornavision since the SABC had the resources to render the services that Lornavision purported to offer.

However‚ before Aguma was suspended in May‚ Tladi and other officials could do nothing because‚ despite their reservations and misgivings‚ they were effectively subordinate to Aguma.

The SABC owed more than R19 million to Lornavision for its services by April 30‚ 2017‚ according to the judgement.

Shangisa said that Tladi was summoned by Aguma to an unscheduled meeting with Lornavision in June 2015. The purpose of the meeting was ostensibly to entertain a presentation by Lornavision on how the company was able to assist the SABC in revenue collection for TV licences.

Aguma not completely off the hook‚ says SABC

Although the SABC has accepted former acting CEO James Aguma's resignation‚ he is not completely off the hook.
Politics
4 years ago

Shangisa said this did not make any sense given that the SABC had‚ in any event‚ recently appointed seven debt-collection agencies.

“There can be no gainsaying that the issues raised in this matter are of significant importance‚” said the ruling by Shangisa.

“They concern a flagrant breach of the constitutional and legislative injunction that requires that an organ of state‚ such as the SABC‚ must procure goods and services in accordance with a system that is fair‚ equitable‚ transparent‚ competitive and cost effective. “The facts of this matter indicate that none of these requirements were complied with when the agreement was concluded with Lornavision.”

He said the appointment of Lornavision in 2015 was a deviation from normal procurement processes.

Shangisa said the procurement policy of the SABC made it clear that deviation from the normal bidding processes was only allowed in exceptional‚ urgent and emergency cases.

He said Lornavision approached the SABC‚ and the public broadcaster’s policies prohibited such bids.

“On the common cause facts of this matter‚ it has not been shown that‚ when Lornavision was appointed‚ exceptional‚ urgent or emergency circumstances existed which warranted a deviation from the normal procurement policies of the SABC‚” Shangisa said.

He said there was no objective proof that Lornavision’s appointment was beneficial to the SABC.