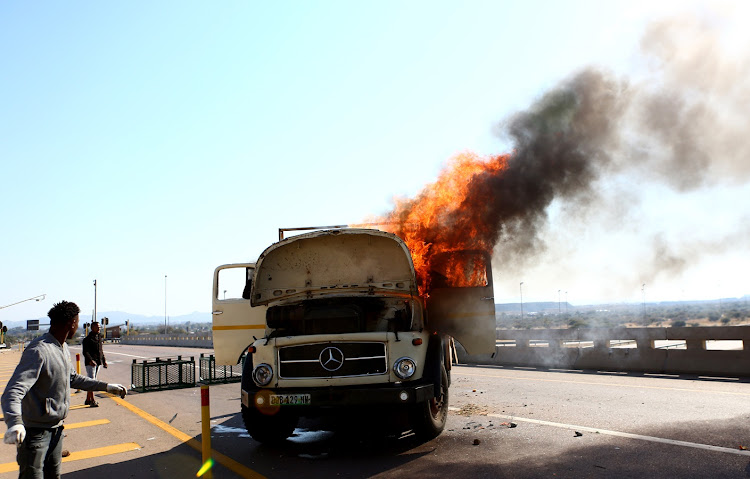 Residents of Majakaneng in the North West burn a truck during a protest over a man who was killed by a farmer.
Image: Masi Losi

The N4‚ the R104 to Mooinooi and several other roads in the North West are closed due to a protest by Majakaneng residents who are demanding the arrest of a local farmer accused of killing a man.

Community leader Charlie Mathupi said the deceased was shot while attempting to steal oranges at the farm two weeks ago.

The 24-year-old's body has not been recovered.

"We want the farmer to give us the body. Teboho Ndlovu's family is in pain because they don't know what happened to him‚" said Mathupi.

Protest action in the area has been ongoing for three days.

On Tuesday‚ passing cars were pelted with stones. A delivery truck was also hijacked and set alight by protesters.

Police are on the scene. No arrests have been made.

North West community protests over mine not hiring locals

Over 200 residents in North West barricaded the N18 road from Mahikeng to Vryburg with burning tyres on Monday morning.
Business Times
4 years ago

North West police suspect that the protest by the Majakaneng community on the N4 on Monday morning was over the death of a 24-year-old man whose two ...
News
4 years ago