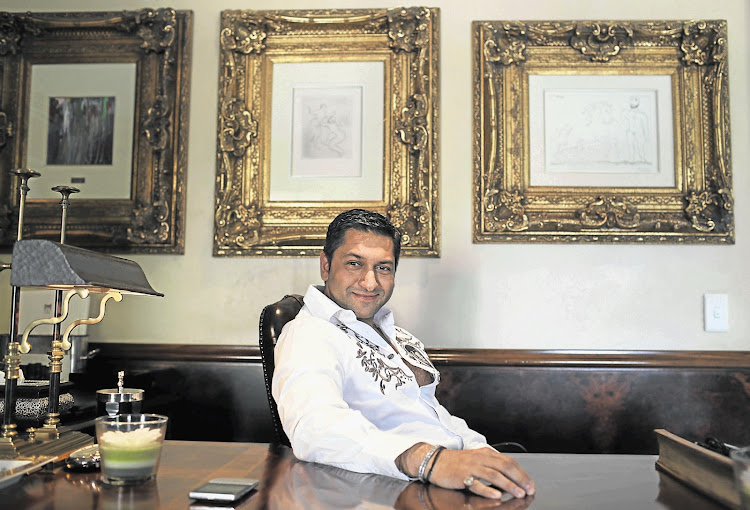 Zunaid Moti in his home office in Joburg

Business tycoon Zunaid Moti, who is listed by Interpol as an international fugitive, was dealt a blow earlier today in the North Gauteng High Court.

Moti‚ along with his father‚ Abbas Aboo Baker Moti‚ and their business associates‚ Ashruf Kaka and Salim Bobat‚ were attempting to interdict President Jacob Zuma and his government and force them to hold off on an international arrest warrant issued in their names.

All four are listed by Interpol as international fugitives.

The men stand accused of defrauding an allegedly disgruntled business partner - Russian citizen Alibek Issaev - out of R6.6-million in an apparent bogus mining deal. The fraud allegedly took place in Lebanon in 2013.

The men claim that they have never travelled to that country and that their arrest warrants were obtained on falsified information.

Interpol issued red notices (international arrest warrants) for the men in June. A red notice is issued when countries are unable to arrest suspects who have fled their policing jurisdictions.

The four are challenging their original arrest warrants in the Lebanese courts and will next week make submissions to Interpol in France to have the red notices overturned.

In their affidavits‚ the four have claimed that their arrest warrants were obtained after a potential business deal with Issaev went sour and he allegedly stole intellectual property from them‚ for which they obtained an Interpol arrest warrant against him.

They also allege that he stole a rare R500-million pink diamond from them‚ which he had promised to sell but allegedly did not. He failed to return the 50.66 carat diamond.

Judge Hans Fabricius this morning‚ agreeing in part with the State's arguments‚ dismissed the accused's application with costs.

The State had argued that the accused's application was flawed in that they had listed the president in their court papers instead of the justice minister‚ who has ultimate say over an extradition request.

State attorney Nelson Govender had argued that South Africa does not have an extradition treaty with Lebanon‚ and that Lebanon‚ despite being informed of the accused's whereabouts‚ had not yet made a request for their extradition.

Fabricious‚ giving his reasons for overturning the application‚ said: "On the present facts‚ it is my view that the applicants are not liable to be arrested or detained under 'any law relating to extradition or fugitive offenders'.

Former Brigadier Steven Choshi is being investigated for corruption following claims of irregularities in him issuing firearm licences, police said ...
News
9 years ago

"It is common cause that they are not fugitive offenders‚ and they are not liable to be arrested inasmuch as there is no request for extradition by Lebanon.

“The procedures required have not yet commenced‚ and cannot yet be commenced. A warrant for their arrest can therefore not lawfully be issued at this stage."

He said that there was "at present no lawful basis for such an arrest or even threat of such arrest an arrest.I

"The result is that the applications are not entitled to interdict in this context."

Kaka‚ speaking to TimesLIVE outside court‚ said the four were not disappointed by the ruling.

"Our legal representatives are reviewing the ruling. We knew that our application‚ which was pre-emptive‚ was unique in nature and therefore the chance of success would be limited.

"It’s not of real concern to us as we can still do business. We have the technology that allows us to do business‚ in countries where we are based‚ remotely. There are still countries within the SADC [Southern African Development Community] region where we can still travel to as they have no extradition treaty with Lebanon."

He said they believed that the ruling was a "win-win" for both them and the State.

Kaka said their application had a dual purpose. "The State has now officially been informed that there is an arrest warrant for us and‚ if there is an extradition request‚ any decision that will be made in future‚ has to take this into account."

He said they believed the State sympathised with them in regard to the abuse of Interpol's system and the ease that Interpol red notices could be issued.

"It’s clear it is easier to get a red notice than it is a driver's license."

He said their legal challenge about the issuing of the Lebanese arrest warrant and the administrative review of Interpol red notice was progressing well.

"In terms of the Interpol matter our attorney's are busy with the final administrative documents with our submissions occurring early next week."

Kaka said the Lebanese warrant review matter had hit a "slight delay" with that country's court administration staff currently on strike and their courts in recess.