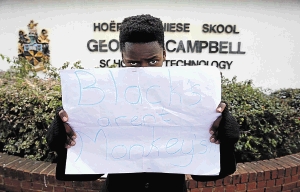 ENOUGH IS ENOUGH: A George Campbell School of Technology pupil holds up a notice denouncing their treatment at the hands of teachers Picture: Thuli Dlamini

Pupils at a Durban school blocked the entrances and exits to the grounds yesterday amid accusations teachers had called them "monkeys".

The drama unfolded at the George Campbell School of Technology at about 1pm. The pupils used benches and concrete bollards to prevent parents, staff and union members from entering or leaving the grounds.

Metro police and SAPS officers were at the school. There was no violence.

The protest leader, a matric student who did not wish to be identified, said teachers called black pupils "monkeys" and other racially-charged names.

"We are being called monkeys and when we question it we are told that that is part of the boer culture and that is how they are made," the pupil said.

"One teacher allows Afrikaans to be spoken in his class and engages students in the language, but if I try to speak Zulu I am reprimanded and told it is a stupid language. We decided to close the gates until our concerns are addressed," he said.

Racial insults‚ drinks and expletives flew as spectators got involved in a scrum after this weekend’s Sharks win over the Golden Lions at Ellis Park.
News
5 years ago

Another student leader said their protest would continue until teachers they accused of racism were removed from the school.

"We want the teachers who call us k*****s and monkeys to be taken out of this school.
We can't have people who promote such behaviour lingering here.

"The sad part is we are going through the same thing that our parents went through.
This year these things will end," he added.

The pupil said they raised the race issue with school management, but were ignored.

"We have been protesting about this and they have been withholding our marks to get to us. We have been waiting and we need to apply to university."

Education department spokesman Kwazi Mthethwa said: "We are prepared to take action against any person found to have racially victimised our learners."